President Donald Trump recently voiced support for boycotting Harley-Davidson if the company moves production overseas, but York County politicians and officials across the political spectrum aren't having it. 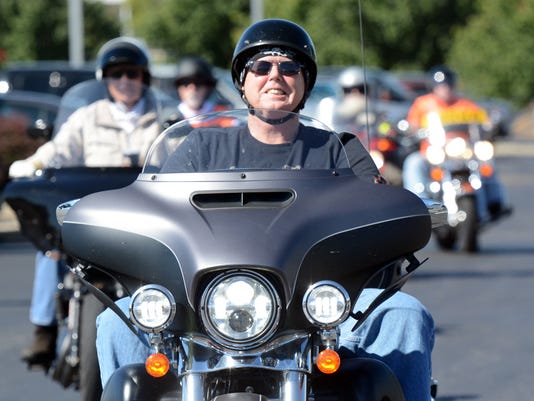 President Donald Trump recently voiced support for boycotting Harley-Davidson if the company moves production overseas, but York County politicians and officials across the political spectrum aren't having it.

Trump's comments came via Twitter on Sunday, Aug. 12, when he said it was "great" that "many Harley-Davidson owners plan to boycott the company if manufacturing moves overseas."

The iconic bike-maker employs about 800 at a plant in Springettsbury Township and has said it's planning to boost its local workforce.

In January, the company said it would consolidate its Kansas City, Missouri, plant into its York facility, making it the hub for operations of the company's Softail, Sportster and Street motorcycles.

Harley said at the time it would be adding about 450 full-time, casual and contracted employees at the facility during an 18-month period.

Many @harleydavidson owners plan to boycott the company if manufacturing moves overseas. Great! Most other companies are coming in our direction, including Harley competitors. A really bad move! U.S. will soon have a level playing field, or better.

Trump's tweet came a day after roughly 180 bikers from the group "Bikers for Trump" met with the president at his golf course in Bedminster, New Jersey.

Currently, the country is in the midst of a tariff battle after Trump imposed tariffs on steel and aluminium earlier this year, promptly receiving retaliation in the form of the European Union's own tariffs on motorcycles and other goods.

Possible boycotts came to light after Harley-Davidson announced in June it is moving production of motorcycles sold in Europe to facilities outside the U.S. as a result of the tariffs.

Possible ripple effect: The importance of the Harley-Davidson move hits close to home in York County, and boycotting a business with such local economic power could cause a "considerable rippling effect," said York County Economic Alliance President Kevin Schreiber.

"It's unfortunate that (potential boycotts) are a byproduct of a much larger discussion, and certainly this doesn't contribute positively to our local economy and many of our employees," he said. "Hopefully, cooler heads could prevail."

The former Democratic member of the state House added that there are bigger fish to fry in the ongoing tariff war.

"Hopefully, we can get back to working more toward resolutions on trade, tariffs and international discussions," Schreiber said. "Ultimately, Harley is only one company that is impacted, and I don't think anyone wants to see our economy go through this type of strife."

"Harley-Davidson provides quality, family-sustaining jobs in our community, and I'm disappointed that these policies are projected to have such a negative impact," incumbent Rep. Scott Perry, R-Carroll Township, said. "Tariffs are detrimental to our economic goals, and I'm hopeful that the president will resolve these trade disputes quickly for the long-term benefit of American working families.”

"The Harley-Davidson manufacturing plant in York, the bikes that it produces and the jobs that it provides are a point of pride for the local community," Scott said. "Putting its workers in the crosshairs of this trade war was entirely avoidable."

Commissioner Doug Hoke, the sole Democrat on the board, added that while he'd hate to see the company move production overseas, the local economic impact of the company deserves continuous support, not boycotts.

"I wouldn't like to see any manufacturer move out of the country, but I'd hope people would continue to support them here in York County," Hoke said. "Having them here in the community is a big economic benefit, and I'm happy to see them prospering."

"Obviously, boycotts could have an adverse impact locally and I'd be very concerned about it," the Republican said. "With the transition from Kansas City to here, we've had a nice bump up in the manufacturing community."