A standing-room-only crowd told Springettsbury Township Board of Supervisors they made a mistake when they flipped their stance to opt-in to permitting casinos in the municipality.

Residents showed up for a public hearing, in which none of them supported the idea of a casino located at the York Galleria Mall. (Jana Benscoter)(Photo: The York Dispatch)Buy Photo

Springettsbury Township residents did just that at a public hearing Thursday, July 26, when a standing-room-only crowd told township supervisors they made a mistake when they flipped their stance to opt-in to permitting casinos in the municipality.

Morris, who did not attend the hearing, said later that Penn National “always take(s) into consideration how residents feel.”

State lawmakers expanded gambling in October 2017 but gave municipalities the authority to decide whether they wanted in.

Residents sounded off at Thursday's hearing before the supervisors approved three ordinances that made it legal to locate and operate a casino in the York Galleria mall.

“My question is if you didn’t pass any of these ordinances, we wouldn’t have to worry about a casino coming here because we don’t have the proper ordinances,” said Kathy Bateman. “It seems to me this is something that you have in mind to make income for the township.”

The ordinances approved that night defined casinos and gambling, as well as what accessory uses can accompany them; changed York Galleria's zoning to allow for casinos; and changed the York Galleria reuse design standards.

“Why would you?” Bateman asked. “Why would you even consider putting in a facility that is within a 2-mile radius near a high school, two middle schools, several elementary schools and right across from a wonderful new playground for children?”

Some residents said they feared increased crime, specifically drinking and driving, as well as drug activity, would creep toward other areas of the township, which would stretch the police department.

Chairman Mark Swomley, and supervisors George Dvoryak, Blanda Nace and Charles Wurster defended their positions. They said they not only voted to opt-in for the economic impact but also said they wanted to try to control where a casino would be located if this is the direction the state is going with gambling.

Kathleen Phan, who was the only supervisor to vote against opting-in, said now that the township is being considered, she supports defining casinos and gambling, as well as where they can be located.

“We’ve heard these concerns time and time again,” Morris said. “They are unfounded. We bring jobs and a lot of opportunity and revenue to communities.”

Penn National hasn’t arrived at a site for its mini-casino, he added. Regardless of the ordinances being passed, he continued, it’s a level playing field among the four locations they are considering: Hellam, Manchester, Springettsbury and Shrewsbury townships.

“We’re working with the townships to find the best location for our facility,” he said. “We are working on our economic impact analysis and traffic analysis. Hopefully, we will have an announcement in the coming weeks.”

Penn National paid Pennsylvania Gaming Control Board $50 million for the opportunity to place a casino in York County. The board gave them until Sept. 12 — after having received a two-month extension and dropping its lawsuit against Gov. Tom Wolf and the state of Pennsylvania — to select a site. 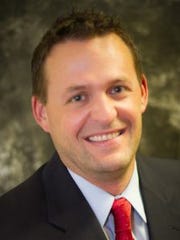 “We will have to submit our application on Sept. 12, so we will announce possibly a week prior,” Morris speculated. “We’d expect to open 12 to 18 months after that. We have to go through new construction or refurbishing a new facility (and) workforce development. We’ll reach out to job centers and career centers in York County. We hire up to 90 percent locally.”

Mini-casinos can have 750 slot machines, and Penn National, which operates Hollywood Casino near Harrisburg, has said it plans to pay another $2.5 million to operate 30 table games.

“We’re very excited to be moving into York County and becoming an active member of the greater York County community,” Morris said.