Congressional candidate Jess King may be a familiar face in Lancaster County, but the recent redistricting means she has to court York County voters who have only known a home-grown representative.

Congressional candidate Jess King might be a familiar face in Lancaster County, but the recent redistricting means she has to court York County voters who have only known a home-grown representative.

In late January, the state Supreme Court imposed a new congressional map that split York County — which had been fully in the 4th District — between the 10th and 11th congressional districts.

The court pushed the 11th District, formerly the 16th, west  into York County and shifted the 10th District, previously the 4th, north to encompass all of Dauphin County.

King's opponent in the 11th, Republican first-term incumbent Lloyd Smucker, has a brief history with York.

In the late 2000s, he held a state Senate seat that once represented a sliver of eastern York County until redistricting in 2014 moved him out of the county.

King, however, is a relative unknown west of the Susquehanna River.

King's history: King was born and raised in rural Leola, Lancaster County, and attended Lancaster Mennonite High School, the same high school as Smucker —even though he grew up in an Amish family.

Later, she attended Eastern Mennonite University and then earned her MBA from Bard College.

In 2010, she became executive director of Assets, a nonprofit organization focused on transforming local communities through business.

More: Political analyst: Many small donations a sign of enthusiasm for Dem in 11th District

"I grew up in a small-business environment," King said. "My dad died when I was a baby, and my mom eventually married my stepdad. They didn't have college degrees, so he started a painting store. Because of that, small businesses are something that are ingrained with me."

King currently serves as a local economy fellow with the National Business Alliance for Local Living Economies and works with the Coalition to Combat Poverty’s Private Sector Working Group. 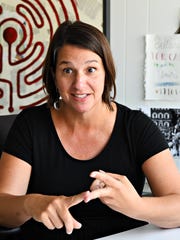 She  received the Lancaster Ethics in Business Award from Lancaster's Samaritan Counseling Center and the Baldwin Fellowship from the Lancaster County Community Foundation, which aims to "enhance the capacity of Lancaster County community benefit leaders to create change," according to the website.

"We don't think we're on the spectrum of left to right," she said. "So many people feel like both parties have failed in a lot of ways, and there are a lot of opportunities to talk about bottom to top."

In April, Sen. Bernie Sanders — the Vermont Democrat who challenged Hillary Clinton for the party's nomination in the 2016 presidential race — endorsed King for her local initiatives in economic development and "grass-roots energy."

Despite the "D" denoted on the ballot, she largely considers her efforts independent, she added.

"We're in a two-party system, and we're running as a Democrat, but the national party has basically written off this area," King said. "In a lot of ways, I'm showing up as an independent, and we're finding out this resonates with people."

"You can't win in a district like this just by raising a ton of money, buying TV ads and inflaming your partisan base," she said. "That approach to campaigning is part of the reason there's such a partisan divide in our country. I want to have basic human decency and civility and work with the people to get things done."

In addition to her interests in grass-roots politics and local businesses, King's campaign also is focusing on promoting green energy, working to eliminate college debt for students, raising the minimum wage and increasing aid to states and territories in need, such as Puerto Rico.

"It's been amazing in both places," King said. "Our premise is that in places like Lancaster and York, Democrats haven't really invested in a lot of ways. But we believe this is exactly the kind of place that the Democrats need to invest and talk to people."

Most recently, her campaign opened an office in Red Lion, the first of its kind in the area, she said.

"This is still a new thing for York County, as many congressional candidates haven't done a lot of field work like us," the organizer said. "It seems to be going great."

A large part of her message revolves around King's experience working with small businesses and her status as a local, working mother, Sanders added.

"She's been a small-business advocate for many years, and she really helps businesses get up and running," he said. "It's great that we have a candidate involved in the local business community."

King said running in Lancaster County and York County is roughly the same.

"The district changed, but the issues didn't," she said. "People in both still care about health care, education and child care, jobs and the economy, accountability and transparency with elected officials. That is true in both counties."

The campaign mostly focuses on door-to-door campaigning, phone calls and town-hall meetings, King said. The campaign has more than 23 volunteer-led regional teams and hundreds of volunteers.

A woman in politics: As one of eight women running for congressional seats in the state, King said she hasn't experienced prejudice, but she has noticed the overall political climate with women.

"There's a lot of 'mansplaining' in a male-dominated place where I've worked basically my whole life," she said. "They are just well-intentioned folks that sometimes don't know what to do with women in power."

"I do this for my two daughters," she said. "When we recognized that the state has 18 representatives to Congress and not one of them is a woman, we knew that wasn't right. We're more than 50 percent of the population, but we make up only 20 percent in Congress."

With her daughters and future women politicians in mind, King wants to fight not only for women but also for those in the working class who have been "forgotten," she added.

"I'm running for Congress because I believe Washington is working well for the wealthy and well-connected but not well for the people here," she said. "We need more of us, the working class, in the system."