There were 17 heroin-related deaths in York County in 2013, and not one was related to fentanyl.

Five years later, there have been 59 confirmed heroin-related deaths so far in 2018, and 90 percent of those had fentanyl in the mix, according to local officials.

Now, legislators are targeting fentanyl — a synthetic drug that is 50 times more potent than heroin, according to the Drug Enforcement Administration — in the fight against Pennsylvania's opioid epidemic.

“These drug dealers need to know that if you are selling heroin, selling heroin with fentanyl, you are going to go to jail, and that’s what this legislation does," Regan said. 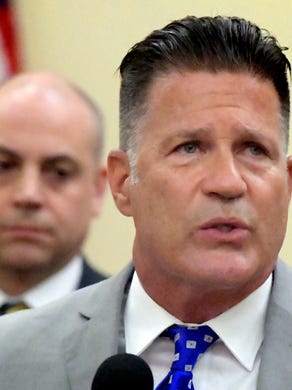 A poster outlines Senate Bill 1222 at a press conference at the York County Administration Center Thursday, July 19, 2018. The bill would establish sentencing guidelines for the trafficking of fentanyl. Bill Kalina photo The York Dispatch
Fullscreen

A poster at a press conference at the York County Administration Center Thursday, July 19, 2018, outlines York County heroin and fentanyl deaths. The meeting announced State Bill 1222, which would establish sentencing guidelines for the trafficking of fentanyl. Bill Kalina photo The York Dispatch
Fullscreen

The bill is awaiting referral to a state Senate committee. The Senate returns to session in late September. Regan said he is hopeful the Legislature will quickly approve the bill and send it to the governor for his signature.

“This legislation by itself is not that cure, but it is an absolutely critical component to the weapons that we have to keep this community safe and stop this epidemic," Sunday said.