When asked if Smith was still in cuffs when he was shot, Harrington said, “Absolutely — no question.”

Another witness who was at Santander Bank at the time of the police-involved shooting in Spring Grove on Wednesday said he saw police shoot Ryan Shane Smith Jr. in the leg.

He relayed what he saw when reached Friday, June 1.

Smith was seated on the floor of the car with his legs out on the blacktop, and police were trying to turn him around and get him up onto the seat, said Harry Harrington, of Jackson Township.

“He was holding stiff,” he said.

When Smith wouldn’t comply, the same officer who had originally used a Taser on Smith grabbed his pistol and shot him in the right leg, Harrington said.

The other officer looked shocked at what happened, Harrington said.

First witness: State police Friday named Smith, 32, of Jackson Township, as the man an earlier witness claimed was shot by an officer while he was handcuffed in the back of a police cruiser in Spring Grove.

Amanda Cozio, who works as a cleaner at the bank, said she saw a man, now identified as Smith, wearing a red bandana and being brought out from the building in handcuffs.

He was arguing with police while seated in the back of a police car when he was shot, Cozio said.

"We certainly will be able to provide a full account of the events at the bank," Bean wrote in a text Friday evening. "But please understand we don't know all of the facts at this point. Therefore it would be premature and possibly inaccurate to comment at this point."

"More accurately I do want to comment. But can't at this time," he continued.

When asked if Smith was still in cuffs when he was shot, Harrington said, “Absolutely — no question,” adding that Smith had been in cuffs for about 25 minutes, since leaving the bank.

In the bank: According to a state police news release, Smith arrived at the bank branch about 4:30 p.m. Wednesday, May 30, and demanded $500,000 from a teller, according to state police.

Smith was told he did not have an account there or identification to make a withdrawal, police said in a news release.

He became disorderly and started to threaten bank employees, who asked him to leave, the release states.

Smith refused and continued to demand half a million dollars from his account, at which point bank employees called the police, according to the release.

Harrington, 69, had just come off a job from his home-run lawn and repair service, and he was going to the bank to withdraw some money when he saw Smith.

Smith was in the middle of the bank, arguing loudly on the phone and spewing profanities.

“I heard him say he wasn’t leaving until he got his money,” Harrington said.

At the time, there were two tellers and one manager in the bank — one of whom informed Harrington they had already called police on Smith and asked if Harrington, a regular customer they knew well, could wait with them until police came, he said.

One officer came into the bank and argued with Smith about the money, Harrington said.

Harrington said the officer used a Taser on Smith a couple of times before “both hit the floor and started fighting, and another cop came in and jumped in the middle."

“I counted five times,” he said, referring to how many times Smith was shocked with the Taser.

Police said Officer Stuart Harrison attempted to place Smith under arrest, but he resisted, according to an affidavit.

A Taser was used on Smith, but it was ineffective, according to police.

Harrison and Officer Michael Matthews were able to take Smith into custody, and he was escorted outside the bank, the affidavit states.

Harrington confirmed the two officers put Smith in handcuffs before calmly walking him outside.

When he completed his business in the bank, Harrington came outside and saw a woman driving up in a blue Mustang, screaming at the police, “That’s my son!” and warning them Smith hadn’t had his medication.

“She dragged me over to where the cops were,” Harrington said, where he saw police struggling to get Smith into the back of a black-and-white police cruiser.

However, the state police news release does not address how Smith was shot in the parking lot of the Santander Bank branch at 39 W. Hanover St.

“The officer-involved shooting portion of this incident is still under active investigation by the Troop J Major Case Team and York County District Attorney’s Office,” the release states. “Further details regarding the officer-involved shooting will not be released until the investigation is complete and reviewed by the District Attorney’s Office.”

Bean, when reached Friday, confirmed the two officers involved have been placed on paid administrative leave during the investigation, which is standard procedure in an officer-involved shooting.

More: Witness: Handcuffed man shot in back of police cruiser in Spring Grove 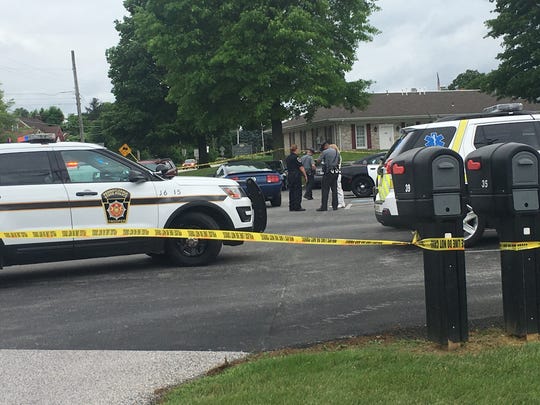 As a result of his plea, his charge of simple assault was dismissed. Common Pleas Judge Craig Trebilcock sentenced Smith to 259 days to 23 months in prison. Smith got a time-served sentence, records state.

Smith faces new charges from Wednesday's incident, including resisting arrest, criminal trespass and two counts of disorderly conduct, according to police, who said he remains in York Hospital.

Christopher Dornblaser contributed to this report.