When a pipe burst in Manchester Borough, numerous property owners found out they were part of an association that had agreed to pay half the costs. 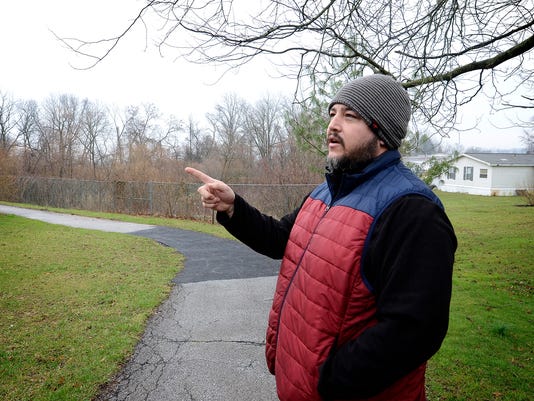 Dauberton Property Owners Association vice president Mauricio Castano points out how runoff from Manchester Borough flows into a holding pond on property owned by the association that is the center of a legal battle between the neighborhood, Manchester Borough and East Manchester Township, Wednesday, April 4, 2018. John A. Pavoncello photo(Photo: The York Dispatch)Buy Photo

Manchester Borough Council members have faced a contentious crowd for several months thanks to a dispute over a retention pond built about three decades ago.

The pond, located in the borough, is privately owned by the Dauberton Property Owners' Association, though many of the association's members didn't even know they were part of the association until its board president knocked on their doors two years ago asking for money.

The tract of more than 100 property owners is split between Manchester borough and East Manchester Township, and a 1988 covenant links them into the Dauberton association, making the owners jointly responsible for common areas, including the retention pond in question.

The property owners' anger stems from a burst pipe feeding into the pond that the borough paid to fix with the association's board — which they didn't know existed — agreeing to pay back half the costs.

The issue is further muddied by the fact that the borough's secretary/zoning officer, who doesn't live within the Dauberton property lines, was serving as the association's treasurer for nearly two decades.

Mauricio Castano, Ken Hufnagel and Cheryl Hatterer all said 2016 — when the pipe burst — was the first time they had heard they were part of an association, despite living on the township side of Dauberton for about a decade each.

The trio was among a group of property owners who then began doing research to get to the bottom of the situation and, eventually, overthrow the association board in hopes of dissolving it completely.

Dauberton Property Owners Association vice president Mauricio Castano points out how runoff from Manchester Borough flows into a holding pond on property owned by the association that is the center of a legal battle between the neighborhood, Manchester Borough and East Manchester Township, Wednesday, April 4, 2018. John A. Pavoncello photo The York Dispatch
Fullscreen 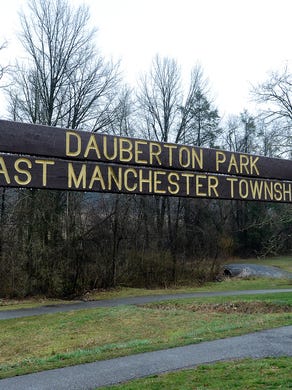 The new association leadership's research led them to believe the former board was operating illegally, and they've directed most of their anger at Judy Hilliard — the borough's secretary and zoning officer — because they believe her serving on the association board was a conflict of interest.

The Duaberton bylaws state that only property owners are eligible to serve on the board.

Hilliard declined to answer questions on the record, but she submitted a written statement explaining the situation, including that she was asked to serve on the board in 1998 and was eligible as a borough representative because the borough owned two lots within the Dauberton property lines.

Connie Lentz, a Dauberton resident who served as board secretary with Hilliard, confirmed that the board did ask Hilliard to be treasurer.

Hilliard, Lentz and president Greg Hughes served as the only board members from 1998 to 2017.

The bylaws state that board members are only allowed to serve, at most, two consecutive five-year terms, and there are supposed to be five board members.

Lentz and Hughes both said they wanted to be replaced and get more board members, but no one would volunteer, let alone show up for annual meetings.

The bylaws also state that at least 20 percent of the property owners must be present at meetings for the board to lawfully transact business. However, after years of only a handful of members showing up, the trio stopped holding public meetings in 2007 and just decided to oversee needed maintenance on their own, according to Hughes and Lentz.

Lentz said she guessed property owners lost interest in the association because there was no money involved.

The association initially collected annual assessments, but they stopped in 1996 after receiving a sizable settlement from an adjoining mobile home park that was originally supposed to be part of the association.

The pond sits surrounded primarily by the mobile home park and a separate community of town houses, Hampton Woods, that is also not part of the association.

Lentz said she understands why residents would be unaware of the association's existence, but their real estate agents should have seen it on the property deeds. It wasn't the board's responsibility to tell every new neighbor, she said.

Hughes, who was the one who knocked on people's doors to tell them they would be implementing an annual $65 assessment, said most neighbors were mean to him and some slammed the door in his face.

The board decided to bring the assessment back because, when a pipe leading to the retention pond broke, they agreed to split the bill of about $20,000 to fix it with the borough.

A group of neighbors stretching from East Manchester Township to Manchester Borough are in a legal battle over a retention pond, Wednesday, April 4, 2018. John A. Pavoncello photo (Photo: The York Dispatch)

Borough engineer Terry Meyers, of C.S. Davidson, said the council decided to step in and make the repairs because the burst pipe created a sinkhole along a walkway that Northeastern School District children used to get to school.

The Dauberton association did collect $65 from most property owners, but that money has not gone to pay back the borough. Instead, it's being used for an attorney as the new board tries to force the borough to adopt the retention pond.

Castano, now the association's vice president, said that as a township resident, none of his water drains into the pond and, in fact, most of the water flowing through the pond is coming from non-Dauberton residents.

Meyers explained that Dauberton's developer intentionally built the pond on an existing drainage way, so it was always taking on water from other properties. The state Department of Environmental Protection doesn't allow developers to do this anymore, he added.

At the Borough Council's most recent meeting on March 12, council President Adam Bowman explained that the borough would be willing to adopt the Dauberton pond if the association works with them to secure grants to improve the pond and bring it up to standards.

Meyers said the pond was included as part of a countywide Chesapeake Bay pollution-reduction effort, so there should be funds available to make improvements.

After an hour of loud back-and-forth between council members and about three dozen Dauberton property owners, the council authorized its solicitor to draft an agreement to send to the association's lawyer that would not include charging the association any money.

"If we appear cynical, it's because we are," Hufnagel, a Dauberton board member, said at one point during the meeting.

Bowman said afterward that the meeting was more cordial than their previous interactions with the association.

Hatterer, one of the Dauberton residents, said she's not as concerned about the money as she is clearing her deed, meaning she wants to dissolve the association so it doesn't affect her property value.

Castano agreed, pointing out that he's trying to sell his house in a couple years. He said the plan is to vote to dissolve the association as soon as the borough takes over the pond.

Meyers said he doesn't think it would be wise since the association still has other responsibilities.