York City Police: No assumptions about fatal fire's cause 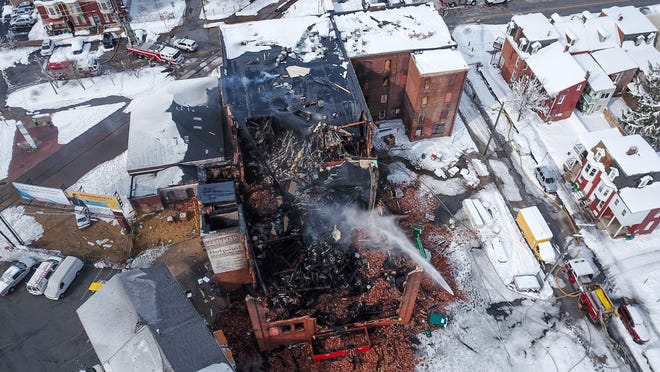 A team from the federal Bureau of Alcohol, Tobacco, Firearms and Explosives is leading the investigation into the Weaver Piano & Organ Co. fire, where a partial building collapse killed two York City firefighters and injured two others.

The extent of such an investigation "is beyond our capabilities here," Interim York City Police Chief Troy Bankert said.

But ATF investigators are experts in fire investigation, and York City Police are assisting them, the chief said.

Bankert said city officers are struggling with the deaths of firefighters Ivan Flanscha, 50, and Zachary Anthony, 29. Both were pronounced dead Thursday, March 22.

"Our guys are dealing with it by keeping busy," Bankert said.

Two hurt: Two other firefighters — Assistant Fire Chief Greg Altland and Firefighter Erik Swanson — were injured in the collapse. They remain in York Hospital in serious condition, according to union officials with York Professional Fire Fighters.

A massive three-alarm blaze at the 127 N. Broad St. building Wednesday, March 21, damaged much of the structure. The building was being renovated, and a portion of it was being turned into apartments, officials said.

City fire crews returned there Thursday, which is when part of the building collapsed and trapped four of them.

"These four firefighters were heroically battling hot spots that persisted as a result of (the) fire that began almost 16 hours before," York City Mayor Michael Helfrich said.

An autopsy Friday, March 23, determined Flanscha died of blunt-force trauma, and his death has been ruled accidental, according to York County Coroner Pam Gay.

The cause and manner of Anthony's death is still pending further review, she said.

What remains of the structure will eventually be torn down, according to Philip Given, Helfrich's chief of staff.

The intersection of Broad and Walnut streets remains closed and likely will be closed for a week, city officials said.

'No assumptions': Bankert said he wouldn't speculate on anything that might happen as a result of the investigation.

"The first thing you do is make no assumptions," he said. "You determine the cause and origin (of the fire) and go from there. ... We're going to let the facts determine our next course of action."

If the fire should be deemed arson, then Flanscha's and Anthony's deaths could be ruled homicides, York County Coroner Pam Gay confirmed.

Bankert said investigators are following "the typical steps of preservation of evidence" that are followed in criminal cases.

Also, he said, a site safety plan has been implemented. It includes such things as requiring those on site to wear helmets.

Residents in the area all have electric service, he said, but at some point power needed to be turned off in the area to allow crews to move around heavy equipment at the site.

At least nine people comprising two families will remain displaced for about a week, according to Helfrich. He said it's possible there may be another two families; that's still being determined.

The displaced are being assisted by the American Red Cross, the mayor said. Also, Chad Taylor of Think Loud Development, and of the band Live, has offered assistance to the displaced, Helfrich said.

The team is comprised of longtime special agents who have extensive expertise in determining the causes of explosions and fires, as well as forensic chemists, electrical engineers, accelerant-detection dogs and others, according to a news release from Hennessy.

Anyone with information about the fire is asked to call the ATF's 24-hour toll-free hotline, 888-ATF-FIRE, or email tips to ATFTips@atf.gov. Anonymous tips can be submitted using the ReportIt app.