Red Lion is considering claiming eminent domain to have its parking lot against a building, which already resulted in a trespassing lawsuit. 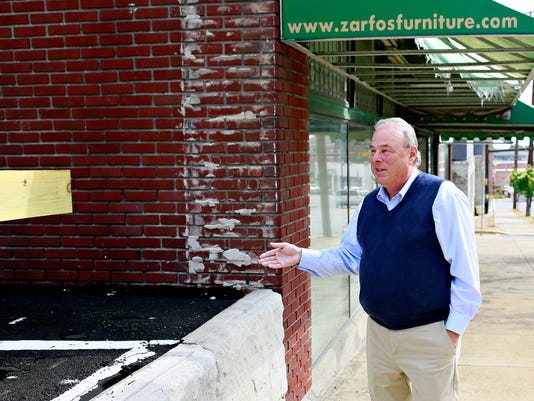 Scott Thompson, who with his wife, Sandra Graham, owns the Zarfos Furniture building, talks Wednesday, May 31, 2017, about Red Lion's new parking lot, which is adjacent to the couple's property in the borough. The couple recently won a lawsuit against the borough for essentially using their building as a retaining wall for the lot, with the court ruling the act trespassing. Dawn J. Sagert photo(Photo: The York Dispatch)Buy Photo

After a York County judge ruled that Red Lion trespassed on a resident's property with its new parking lot, the borough is considering claiming eminent domain to rectify the situation.

Scott Thompson and his wife, Sandra Graham, sued the borough for trespassing under their joint business, ArthurLee LLC, after the borough built a parking lot against one of their properties, the former Zarfos furniture store on West Broadway.

The borough had tried to argue that its actions weren't causing harm to the couple's building, but Court of Common Pleas Judge Christopher Menges ruled in ArthurLee's favor, pointing out in his memorandum for judgement that, under state law, a subject is liable to another for trespass regardless of whether the trespass causes harm.

A hearing for relief in the trespass suit is scheduled for Jan. 17, but before that happens, the borough council is set to vote on an ordinance that would authorize the borough to exercise its power of eminent domain allowing it to "transmit soil load surcharges of a parking lot onto lands of ArthurLee," according to the proposed ordinance.

Eminent domain code allows governmental entities to take property for public purposes while requiring the entity to pay the owner of that property fair compensation for the value of the property plus damages, according to state law.

The council is scheduled to vote on the ordinance in a special meeting 7 p.m. Dec. 27 at the borough office, according to a public notice first advertised in local newspapers Dec. 19.

Thompson said he considers the tactic a form of bullying and won't stop pursuing his lawsuit even if the ordinance is approved.

"I thought this was America," Thompson said. "How can a municipality do what they're doing?"

Charles Rausch, ArthurLee's attorney, said he's never seen a municipal government try to claim eminent domain in an effort to get out of a trespassing lawsuit.

Expert opinion: Dan Biersdorf, a Minnesota-based attorney who specializes in eminent domain law in 11 states including Pennsylvania, said cases where a governmental agency uses eminent domain after already essentially taking the land are uncommon but not unprecedented.

Biersdorf said Red Lion likely has the right to claim eminent domain because the borough parking lot is for a legitimate public purpose, so ArthurLee's case will come down to compensation.

He suggested ArthurLee would have better luck changing its lawsuit from trespassing to inverse condemnation, which is when the government takes private property without paying compensation as required.

Scott Thompson, right, and his wife, Sandra Graham, owners of the Zarfos Furniture building, are shown in Red Lion's parking lot, which was built adjacent to their property in the borough, Wednesday, May 31, 2017. The couple recently won a trespassing lawsuit against the borough for essentially using their building as a retaining wall for the lot. Dawn J. Sagert photo (Photo: The York Dispatch)

"In this case, the government has already done the taking; it just hasn't declared it yet," Biersdorf said.

He said ArthurLee's compensation in this situation would include direct damages — meaning the value of the property taken — plus potential indirect damages, which could be costly if the owners can prove the force of the parking lot is causing structural damage to their building.

Council president Kelly Henshaw, reached by phone, said all questions should be referred to the borough's solicitor, Michael Craley, because the issue is a legal matter. Craley did not respond to an email or voicemail message seeking comment.

The council members who did respond, Nevin "Butch" Horne and Dennis Klinedinst, said they were planning to vote against the ordinance.

Horne and Klinedinst have described a divide between themselves and the other council members, and the duo aided challengers to incumbents during the most recent election, though three of the four incumbents whose terms were expiring won re-election.

Horne said he doesn't believe in the government taking anything from anyone, and he worries this case could set a bad precedent moving forward.

Horne and Klinedinst both said they felt this whole issue could have been avoided if the borough had done a better job communicating with Thompson and his wife before the parking lot was built.