York County has collected about $1.13 million for the renovation of county-owned bridges since enacting a $5 vehicle registration fee a year ago. 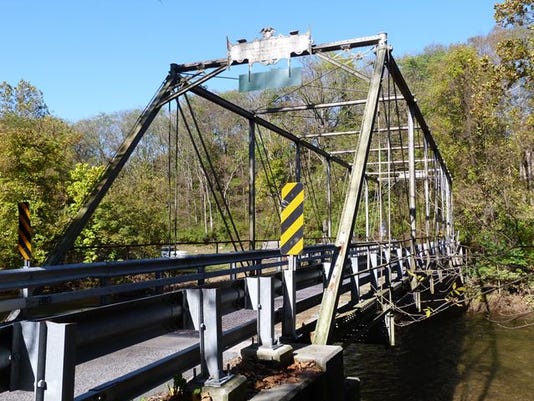 The Green Lane Farms bridge, which spans the Yellow Breeches Creek and connects York and Cumberland Counties, has reopened after four months of rehabilitation, officials announced on Aug. 29, 2017. (Photo courtesy of HistoricBridges.org)(Photo: Submitted)

York County has collected about $1.13 million for the renovation of county-owned bridges since enacting a $5 vehicle registration fee a year ago.

Will Clark, the county planning commission's chief of transportation planning, updated commissioners Wednesday, Oct. 4, on the status of the fee collections, which began Oct. 1, 2016.

The fees, which are collected by the state Department of Transportation and remitted in full to the county, amounted to about $1.13 million through nine months, Clark said. The annual projections are about $2.04 million, he added.

Clark told commissioners that the planning commission has chosen to allocate these funds solely for major renovations to bridges that are 100 percent owned by the county. The county currently owns 93 bridges.

The county has already completed renovations to Green Lane Farms Bridge in Fairview Township for $235,000 from those funds, Clark said.

The other four bridges scheduled to be renovated using the collected fees include:

York County drivers are automatically charged the $5 fee whenever their vehicle registration comes due, but there is a way around paying the fee every year.

Clark said about 10 percent of York County residents are projected to be using the two-year registration option.

Steve Malesker, C.S. Davidson senior project manager, said about 25 percent of York County's bridges are structurally deficient or functionally obsolete, and that figure is projected to rise in coming years.

York County is one of 14 counties in the state imposing this $5 fee, according to Clark, and PennDOT officials have stated they intend to offer $2 million in matching funds to these counties in coming years.