Images of snarled traffic jams is the last thing those who live and work near Mount Rose Exit 18 off I-83 want to envision. 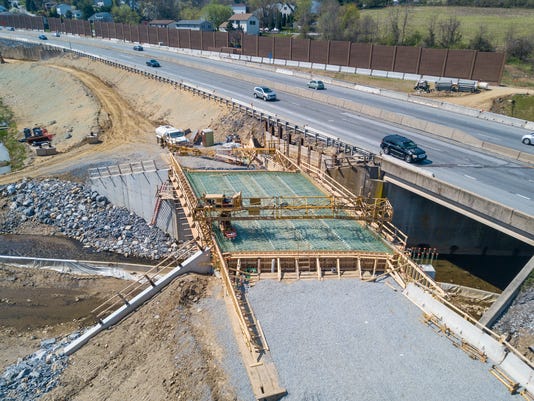 A new bridge is under construction on the northbound side of Interstate 83, south of Mount Rose Avenue, Sunday, April 16, 2017. John A. Pavoncello photo(Photo: The York Dispatch)Buy Photo

As long ago as 2003, the state Department of Transportation acknowledged Interstate 83’s Mount Rose Avenue interchange was a nightmare for commuters.

It was the worst for traffic congestion in York County and one of the worst in an eight-county region of south-central Pennsylvania, according to a PennDOT engineer who, at the time, briefed about 100 residents on possible fixes.

Fourteen years and millions of dollars later, relief is in sight.

But it hasn’t been easy on residents and businesses near the project or for any motorist trying to pass through it.

“It’s just gridlock every day,” said Jason Smith, manager of Parma Pizza and Grill in the nearby Haines Acres Shopping center, who said his drivers compete with the project’s progress to earn a living.

And now PennDOT says the competition might go on a little longer than expected.

Projected timetable: The $59.5 million project began in April 2015 and was expected to wrap up in June 2018. However, unanticipated additional work has pushed the completion date to November 2018, and even that estimate might be optimistic.

“We thought the contractor may be able to catch up on their schedule this year,” PennDOT spokesman Greg Penny said. “It seems likely the project will extend into 2019. This will depend on how well the contractor works this year. We should be in a better position this summer to gauge the progress made and how long it will take to completion.”

That’s likely the last thing those who live and work near the Springettsbury Township interchange — which handles more than 60,000 vehicles per day — want to hear.

The construction has been discouraging not only for businesses trying to make deliveries but also for employees trying to get to or from work.

Amy Updegraff, one of Smith’s employees at Parma Pizza and Grill, said her commute home to the Etters area from the Haines Acres Shopping Center has been frustrating during the construction.

“Sometimes you wait there forever,” she said. “I sat there one time trying to take a left turn for 15 minutes.”

Two doors down from Parma Pizza and Grill, employees of Big Apple Bagels also said the project has exhausted them.

Nicole Jordan, who commutes from the York College area to the shopping center, said the roadwork has made her late for work. She said it’s annoying to be able to see the shop from her car while she sits idle in traffic. 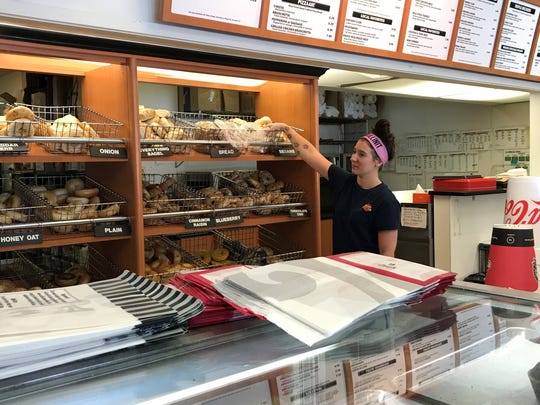 Living in the thick of the project, Haines Road resident Justin Rudacille said his daily routine has been affected.

He said he likes to play golf at Heritage Hills Golf Resort, just east of the construction, in the afternoons, but “there have been days when I can’t leave my driveway without hitting a huge line of traffic.

“I’ve learned how to cut through neighborhoods,” Rudacille added.

He said he noticed the project seemed to have “started” and then “stopped” at times, which wasn’t reassuring to him.

“Traffic appears to be getting a little better now, because it seems like people are avoiding the area,” Rudacille said.

There was also “unanticipated additional excavation” across the project, Penny said, for which the state and general contractor had not accounted.

Cherry Hill Construction Inc. of Jessup, Maryland, is the contractor for the project, which initially carried a $58.3 million price tag. Because of the additional work, the project is over budget, increasing the total cost to $59.5 million.

“Running into situations like this is not unusual for a project of this size and complexity,” Penny said.

A view of the Mount Rose Avenue, Interstate 83 construction project from a drone.

The project includes the reconstruction and widening of a 1.3-mile section of the interstate and reconfiguration of the Exit 18 interchange ramps for Mount Rose Avenue, also known as Route 124 in that area.

Portions of Route 124, Camp Betty Washington Road, Haines Road and Green Hill Road will be reconstructed and widened to facilitate traffic flow around the interchange.

Penny said the contractor has scheduled night work to begin in mid-May, in hopes of speeding the project along.

Once the work is complete, one of the region’s worst interchanges will be not only less congested but also safer, he said.

A new on-ramp to southbound Interstate 83 is being built from Mount Rose Avenue. Sunday, April 16, 2017. John A. Pavoncello photo The York Dispatch
Fullscreen

A new bridge is under construction on the northbound side of Interstate 83, south of Mount Rose Avenue, Sunday, April 16, 2017. John A. Pavoncello photo The York Dispatch
Fullscreen

A view of the construction site on the east side of Interstate 83, looking north to Mount Rose Avenue, Sunday, April 16, 2017. John A. Pavoncello photo The York Dispatch
Fullscreen