Granger A. Reid sits on his porch while youth with the York Association of the United Church of Christ's Group Mission Trips Workcamps paint inside his home in York City, Tuesday, July 12, 2016. Reid has COPD and is unable to do many of the tasks necessary to keep his home updated. Dawn J. Sagert photo(Photo: The York Dispatch)Buy Photo

Granger Reid sat outside the house that he plans to eventually pass on to his children on Tuesday afternoon, with his oxygen tank and a drink of water at his feet.

Occasionally, he waved to passing cars that honked as they went. Just inside his front door, a group of five strangers painted and cleaned while he peacefully watched South Penn Street, a place in the city he has called home for 30 years.

Reid had open-heart surgery in 2000 and has developed chronic obstructive pulmonary disease, or COPD. He has trouble doing work or being active because of this, requiring an oxygen tank to follow him wherever he goes. Something as simple as walking down his front steps and to his car can cause him to lose his breath, he said.

Because of this, the home he's lived in with his wife for more than 30 years needed some touch-ups that Reid just couldn't do himself, such as a new coat of paint. At 71 years old and unable to work, he doesn't have the money to pay others to help fix up his house, either.

His home on South Penn Street is more than a home. It's Reid's legacy, something he hopes will be in his family for generations. He had the house when he worked two jobs for more than 50 years, when his sons and daughters were born and when his health problems began.

"Any time you can better your home, you're bettering your heart," Reid said.

The five kids at Reid's house, ranging in age from 11 to 17, are from all over the country and Canada. Each found out about the program through a church or youth group. The kids pick an area in the country where they'd like to go to and have to raise more than $500 to participate to help pay for supplies and transportation for their week of volunteering.

Ben Schroeder, 14, of Virginia Beach, Virginia, paints walls in the home of Granger A. Reid and his wife, Betty, in York City, during the York Association of the United Church of Christ's Group Mission Trips Workcamp Tuesday, July 12, 2016. Dawn J. Sagert photo (Photo: The York Dispatch)

Local residents apply to the program and are chosen if they have a need they can't meet on their own. Those helped are typically elderly, disabled or victims of financial or social hardship, according to documents provided by Group Mission Trips.

There are 333 volunteers staying at Spring Grove Area Middle School this week, where they will have their meals, sleep on classroom floors and participate in evening programs together. On the first day of camp, the students are told what their work assignment is and who they'll be working with: a group of kids they've never met before.

Positive experience: According to the adult volunteer with the group working at Reid's house, Beth Brinkerhoff, jobs can range from scraping and painting walls, such as at Reid's house, to building fences, putting in wheelchair ramps or even cleaning.

"It's a positive experience because the kids get to step out of their normal lives and experience something new," said Brinkerhoff, who's originally from Sherman, Illinois. "It's good for the neighborhood, too; it gives everyone a good feeling."

Kim Sawyer, the Workcamp director, who has been involved with the program since 1999, explained that the Workcamp helps teach kids skills they might not otherwise learn, such as fixing drywall or using tools. Kids leave the program with lasting friendships, having spent all week together working, learning about each other and participating in the evening program, which typically involves music, skits and worship. 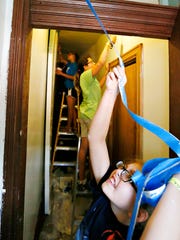 From front, Korah Pinter, 11, of Sherman, Illinois, removes painting tape in a completed area while Marie Peters, 12, of Chicago, Illinois, and Maia Spoto, 15, of Washington, D.C., all with the York Association of the United Church of Christ's Group Mission Trips Workcamp, paint the hallway at the home of Granger A. Reid and his wife, Betty, in York City, Tuesday, July 12, 2016. Reid has COPD and is unable to do many of the tasks necessary to keep his home updated. Dawn J. Sagert photo (Photo: The York Dispatch)

"Kids are scared to death Sunday night when they're divided into crews," Sawyer said. "By Friday night they're such good friends. You get to see everyone who's different working on something together."

New friends: The fact that the program is faith-based helps the kids find common ground among the total strangers they'll work with during the week. Ben Schroeder, a 14-year-old from Virginia Beach, Virginia, found out about the program though his pastor. A lot of people from his church are participating in the program, but he wasn't working with any of them. This hasn't made him uncomfortable, though.

"It's a really fun atmosphere," Schroeder said. "Everyone is really kind to each other. Everyone is a follower in Christ, so you all have that in common."

And thanks to these total strangers, Reid will have freshly painted walls in his hallway, living room, kitchen and dining room by the week's end. He was thankful to the kids who were working so hard for his legacy. Not only will the fresh paint help liven up his home, but the cleaning of the walls will help his health and make it easier for him to breathe, Reid said.

He praised the kids who have been working on his house, saying he hasn't once heard an argument. Instead, his home is filled with laughter and music while it gets a much-needed update. It's the type of work Reid says the world needs more of.

"This is a blessing," Reid said. "Kids today need to learn how to work together, rather than how to carry and load a gun."