Former York College professor and well-known researcher David Polk was never one to soak up the spotlight. 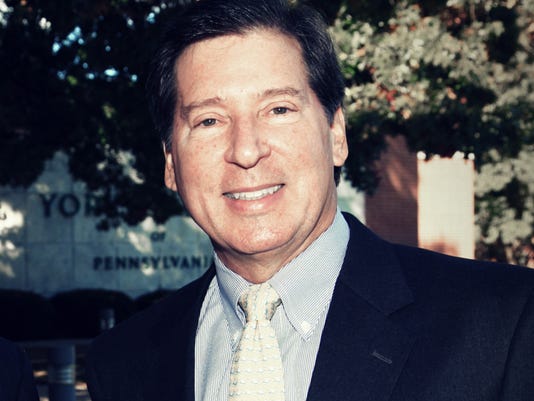 Former York College professor and well-known researcher David Polk was never one to soak up the spotlight.

“What I really liked about David is he was gracious and generous. He had this confidence and humility about him,” said Matthew Randall, executive director of the college's Center for Professional Excellence. "His fingerprints are on parts of the county that not many people knew about."

Polk was known throughout the county for his research work and efforts to improve the community. He was slated to be named president of the Rotary Club of York this year to mark the group's 100th anniversary.

He had to turn down the offer because of a brain tumor.

Polk, of North Codorus Township, died Saturday. He was 68.

Academia: Polk got an early start in teaching, joining York College in his early 20s. His journey at the school spanned decades. He retired about two years ago, capping his 42-year career.

During his time with the school, Polk served as the chair of the Behavioral Sciences Department and as director of the Institute of Applied Social Research.

“He didn't tell the students what to think; he taught them how to think," Randall said.

Dominic DelliCarpini, the dean of the Center for Community Engagement, said Polk made sure students knew why the research projects they were working on were important and how the results would make an impact.

"You could rely on his data to be accurate and thoughtful," said DelliCarpini, who knew Polk for 19 years. "He had the really uncanny ability to get to the heart of the question."

When Polk retired from teaching, the college bestowed on him the title of professor emeritus.

"I think he represented what York College is," DelliCarpini said.

Family: Coni Wolf, who was related to Polk through marriage, reiterated that Polk wasn't someone who would bask in the praise he received for his work.

"Quietly accomplished. I think that really describes David," she said.

Wolf, who is a college trustee and vice president of business development at York Container Co., first met Polk nearly 40 years ago when he started dating her first cousin and Polk's future wife, Frances. The Polks enjoyed 35 years of marriage, Wolf said.

Polk was an avid golfer and kept a long-standing Sunday tee time for nine holes that was promptly followed by a call to his mother.

Colleagues described Polk as an always organized person, and Wolf said that translated to his private life.

"He was prepared even if I went to his house for dinner. He'd have gone to market to get everything he needed," she said.

Vigil: A remembrance for Polk will be held in York College's Charles Wolf Gymnasium in the Grumbacher Center, 441 Country Club Road, on Friday.

— Reach Greg Gross at ggross@yorkdispatch.com or on Twitter at @ggrossyd.