Behind the scenes at The Yorktowne

The Yorktowne Hotel has been a staple of York City since it was constructed on the corner of East Market and South Duke streets nearly a century ago. 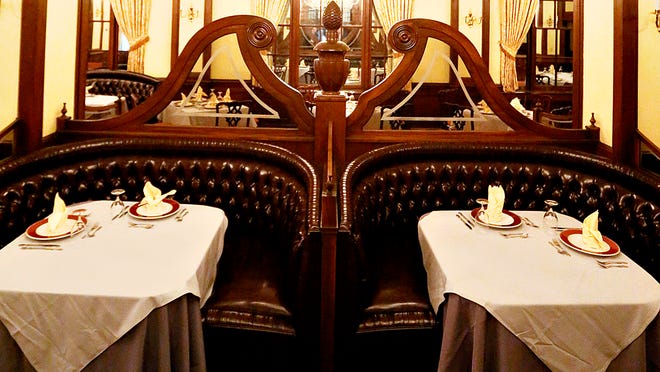 It has played host to dignitaries from the United State and abroad and to celebrities from the stage, screen and world of sports. Most importantly, though, it's been a place where Yorkers have gone to celebrate such occasions as birthdays, anniversaries and weddings.

A lot has changed — from its name to renovations that enlarged it — at the grand, old hotel since it was built in 1925. But one thing has remained constant: "Nothing rises above of the Yorktowne."

The catchphrase was not only meant to highlight the illustriousness of the hotel in six simple words but is also a nod to it being the tallest building in the city, apart from perhaps a couple of church spires.

The  hotel will get a breath of new life when it undergoes a $20 million renovation by its new owners, the York County Industrial Development Authority, that could drastically alter its footprint.

The authority completed the $1.8 million deal to purchase the hotel in late December.

The plans: Blanda Nace, project manager with the industrial development authority, said the exact plans for the hotel are still being kicked around.

One option being considered is to tear down a 1957 addition, which includes a parking garage that's in disrepair and hasn't been in use for some time, behind the original part of the building.

What is known is that the guest rooms will be renovated and the mechanical systems will be upgraded, Nace said.

The authority is working to secure full funding for the project. Once the project is complete, it hopes to sell the hotel, or, in a worst-case scenario, lease it, he said.

Rick Cunningham first became general manager of the hotel in 1985 and, after a short time away, returned in 2008 and has held the role since.

"It's a lot of fun. It's a lot more fun now that we have funding and people who care," Cunningham said of running the iconic hotel. "Jack Kay (chairman of the authority) and Blanda have a vision and the know-how to make it happen."

The hotel has some very unique features, such as a mail chute that runs from the top floor to the lobby. But not all of its features are seen by the public. Here's a glimpse into some of the areas rarely, if ever, seen by the guests who've stayed at The Yorktowne.

Roof-top apartment: The apartment with arguably the best view in York City hasn't been lived in for nearly 40 years. It's on the roof the hotel and once served as home for the general manager.

"This is the best apartment in York," Nace said.

The meager apartment was last used around 1980. The wallpaper and paint are peeling after decades of disuse, and the floors are bare concrete.

But there was a time when the general manager not only lived in it but played host in its small confines. Despite there being a small kitchen about the size of a small walk-in closet in the flat, the general manager, and his wife, usually relied on the hotel kitchen for meals.

"You think about a waiter coming up those stairs with a tray," Cunningham said of the industrial-styled stairs leading to the roof.

The roof affords views of the city and beyond like nowhere else.

The rooms: The guest rooms harken back to a time when staying in a hotel was a thing reserved for special trips. The rooms can easily be likened to those found in bed and breakfast establishments.

Famous figures such as Eleanor Roosevelt, former Vice President Hubert Humphrey, Walter Cronkite and baseball player Joe DiMaggio have all bedded down for at least a night in the hotel. Their names and those of others who have stayed there are included on lists in the two elevators.

A more recent addition to one of the lists is that of Gov. Tom Wolf, Cunningham pointed out.

The Yorktowne was also literally home to many Yorkers. Some the guest rooms were turned into apartments at one time. It's likely the most famous tenant was Voni Grimes and his wife, Lorrayne, who has a gym named for him, and had dreamed of living in the hotel.

"Voni was the last person to have an apartment in here," Cunningham said.

"George Washington is holding a bible. We didn't know it," he said.

Years of smoking in the ballroom caused the bible Washington is holding in one of his hands to become obscured and was only rediscovered after the painting was cleaned up.

The basement: About two floors below ground are the guts of the hotel, the place that makes it tick.

In a vast space, aptly dubbed the engine room, one can see the remnants of the various methods used to heat the Yorktowne. Cut pipes, which once brought steam into the hotel, hang from the ceiling. The old, large coal room is in a corner and the outline of where the oil furnace once sat can be seen on the floor.

That's the order of the heating methods the hotel used, Nace said. Steam to coal to oil and finally to natural gas.

"It's just a mishmash of a century of different heating technologies," Nace said.

Lining a long hallway are numerous doors that lead to the old freezers at one time used to help preserve food. Nace said he's come across four or five of the freezer in his adventures of the building.

In another room is the laundry. Nearby is a room housing the backup generator that's powered by a 1940s-era  four-cylinder Ford car engine. The generator manufacturer likely turned to Ford for engines instead of engineering its own powerplant, Nace said.

Despite its age, the generator still fires up and is tested monthly, Cunningham.

"We maintain this every month," he said.