Five-year-olds Lotus DeGrace and Carisa Acosta learned to plie, tendu and move their arms and feet into the basic... 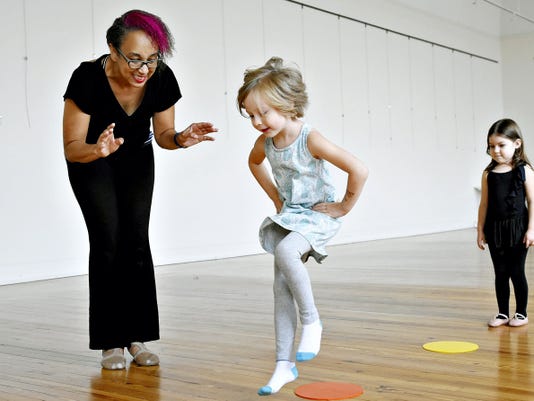 Five-year-olds Lotus DeGrace and Carisa Acosta learned to plie, tendu and move their arms and feet into the basic positions of ballet Saturday while their moms looked on.

They sashayed between colorful shapes on the floor, striking a pose each time they stopped to cries of "Lovely!" and "Beautiful!" from instructor Warkenda Williams-Casey.

She directed them to "use their glue sticks" to glue their hands to their hips and slide into second position.

"No booty dancing! This is serious!" Williams-Casey admonished.

The girls erupted in giggles.

Free workshops: The one-hour class, held on the third floor of the Marketview Arts Building at 37 W. Philadelphia St., was one of a series of free workshops hosted by the Weary Arts Group.

Weary Arts Group, which partners with schools, churches and other organizations to bring arts programming to the community as well as producing its own shows, is using these free "exhibition" workshops to test the waters before deciding which topics it will host as regular classes.

"The main objective is to show all that we have to offer, then tailor-make our classes to what people want," said CEO Cal Weary.

Weary said he's glad to have the flexibility of being able to host free classes to evaluate demand. He also likes the idea of helping people explore new disciplines or get back into old ones without making a monthslong commitment to a structured class.

"Because we're not locked into the structure you have with other organizations, we can play this as a kind of experiment," he said.

The classes WAG will offer on a regular basis will be announced in late September on the company's website and Facebook page, said Tonisha Price, Weary's executive assistant.

They will start in October.

In addition to "scaffold" classes, in which students build their skills from week to week and work toward a performance, WAG will hold regular drop-in classes. Some of the drop-in classes will be donation-only and some will be $10-$15, Weary said.

Weary said the classes are a way to build the skills of community members who will participate in WAG performances.

Broader vision: He said he has a vision for the future of his company and his city.

"As York becomes a more metropolitan place, we want to be able to offer pop-up classes, things people from a bigger city might expect," he said.

Weary said he likes the idea of connecting arts with wellness: The company will soon offer things like yoga with live music.

And he said he's excited about the potential for cross-pollination he sees in the Marketview Arts building, which is also used by York College and local artists as a studio space and exhibition venue and by the Pennsylvania Arts Experience as an orientation center.

"It brings a lot of folks into the space," he said of the classes. "Wouldn't it be awesome to come in and take a tap class and see a piece of art on the wall and think, 'I have to have that?'"

WAG's partnership with White Rose Community Television is also part of the potential for a "positive flow" that Weary sees in the building.

In the last few weeks, WAG has set up a video-editing room where people can come in and share ideas and learn how to do television production.

In class: Back in ballet class, the girls danced in two different tempos with ribbons trailing from their wrists.

Then, the music sped up.

"Can you go faster?" she asked, and all three twirled quickly.

After class, Williams-Casey sat in the long, sunny room to talk with the girls' mothers, Heather Ramsay-Acosta of York City and Amber DeGrace of York Township.

She explained that the girls were learning basic positions, etiquette, balance and rhythm, which would set the foundation for them as dancers.

Williams-Casey, who also teaches at Susquehanna Dance Co. in Mountville, Lancaster County, has worked with WAG for years, she said.

On Monday, Sept. 28, she will teach a special ballet technique in which dancers do barre exercises on the floor.

A full schedule of classes is available at wearyartsgroup.com. Those interested can RSVP via Facebook or just show up for class