Amid a small army of construction workers and their equipment, a group of women gathered and waited patiently... 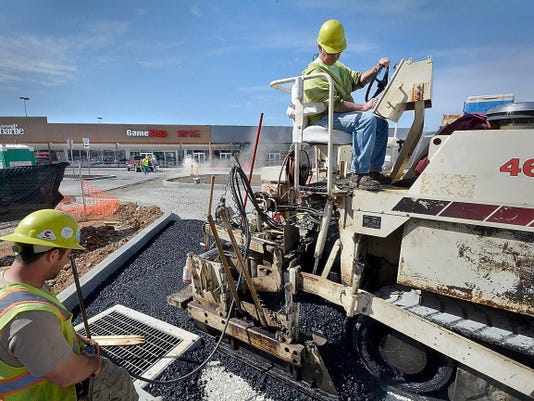 Amid a small army of construction workers and their equipment, a group of women gathered and waited patiently Thursday morning for their chance to get into DSW, the latest store to open for business at the West Manchester Town Center.

Vicky Miller and Karen Bergman were among the first customers of the designer shoe store after it opened its doors following a brief ribbon-cutting ceremony.

Typically the women head south to a DSW store in Maryland to shop, but with the chain's first location in York County now open, they'll save a few bucks in gas.

"This is a lot closer," said Miller, of Jacobus, as she looked for sandals for the summer.

Goings on: Demolition at the 34-year-old enclosed West Manchester Mall got underway last year. Since then, construction crews have been working to, essentially, turn the former mall inside out to create a outdoor shopping plaza.

Construction is expected to wrap up by year's end, said Kevin Potter, sales and leasing specialist with Rhino Realty Group, which is overseeing attracting new businesses to the center.

Between now and then, construction will continue as part of a $47 million redevelopment project, and numerous businesses will open at the site at 1800 Loucks Road in West Manchester Township.

New stores: In the coming months, Buffalo Wild Wings, Firehouse Subs and an AT&T store will open on a pad site on the property near Route 30, said Bobby Traynham, president of Rhino Realty Group.

The group targeted retailers and restaurants that don't currently have a presence in the area when they were searching for new tenants of the revamped mall, he added.

Additional businesses, such as Subway, Sprint, Burlington Coat Factory and Sports Clips, will open up later this year, with GNC and Kay Jewelers slated to open next month.

Rhino Realty Groups is working to ink deals with other businesses to bring them to the center, but Traynham said he can't disclose the names of the businesses.

There are between 10 to 12 vacant storefronts in the center, Potter said.

Traynham said the idea behind the town center is to not only attract new businesses and jobs to the area, but also to create a setting where people can gather.

"It's giving them a place to not only shop but to get together with family and friends," he said. "It really creates a place to come to."

Town feel: On Thursday, a work crew began laying asphalt in a giant area in what was once the northern portion of the mall.

The asphalt will form a road, to be called Plaza Boulevard, and will feature angled parking with shops on either side, Traynham said.

Once fully opened, Potter said there will be several hundred people employed at the mall.

Miller said she's glad to see jobs coming to the area and that consumer dollars will stay in York County.

"I'm sure the mall walkers are going to miss the mall concept, but if someone wants to (re)develop it, I think it's good," Miller said. "It keeps money in York County."

Though Miller and Bergman, of Red Lion, planned to limit their shopping adventure to DSW, they have checked out another relatively new store — Ann Taylor Loft — recently.

"It's nice to have nice stores like these in York to go to," Bergman said.