Two separate lawsuits were filed against WellSpan York Hospital and the manufacturer of a device linked to infections. 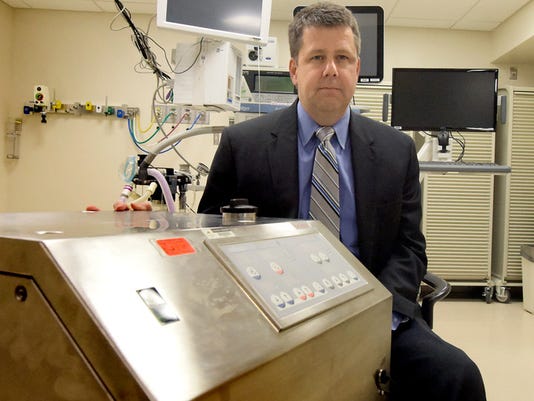 Two separate lawsuits have been filed in York County Common Pleas Court against WellSpan York Hospital and the manufacturer of a device linked to infections in open-heart surgery patients.

Both suits relate to patients who suffered nontuberculous mycobacterium (NTM) infections after undergoing surgeries at the hospital.

WellSpan, with the help of the Centers for Disease Control and Prevention and the state Department of Health, identified several NTM-infected patients, with a likely cause being a heater-cooler unit that was used during the surgeries.

To date, WellSpan has identified 10 infected patients, six of whom have died. The device also has been implicated in similar infections found after surgeries at Penn State Milton S. Hershey Medical Center and University of Iowa Hospitals and Clinics.

Other heater-cooler units exist, but the one listed in the lawsuits was manufactured by German-based Sorin Group, which is a wholly owned subsidiary of London-based LivaNova.

David Inners, a 62-year-old man from Jackson Township, was one of the men identified by WellSpan who died after contracting the infection, according to a complaint filed by his fianceé and estate holder, Wendy Woods.

One of Woods' attorneys in the lawsuit, Tom Kline, said he would be speaking on behalf of Woods and Inners' family.

The other complaint was filed by Conewago Township couple Vincent and Rebecca Karst.  Vincent Karst, 54, is reported to be one of the four York Hospital patients still living with the infection.

Deteriorating condition: Details of each patient's condition following their surgeries reveal similar struggles. Previous reports have warned about the dangers of the infection because of the slow-growing bacteria and wide-ranging symptoms.

Inners underwent open-heart surgery on Dec. 15, 2014, at York Hospital, and he became increasingly ill beginning in May 2015, according to the complaint.

Symptoms worsened in June 2015 for Inners, who began suffering from weakness, lack of appetite, weight loss and low white blood cell count, according to the complaint.

A bone marrow biopsy at Hanover Hospital and blood test at Hershey Medical Center on June 23, 2015, showed that Inners tested positive for NTM, and he began an anti-NTM therapy the next day, the complaint states.

Doctors continued to add medications into September 2015 as Inners was in and out of the hospital suffering from the same symptoms, along with nausea and anorexia, according to the complaint.

On Oct. 22, 2015, York Hospital President Keith Noll told Inners about the hospital's findings connecting his infection with the heater-cooler devices, the complaint states. Inners was then admitted to York Hospital for congestive heart failure, and he died on Nov. 7, 2015, according to the complaint.

Prior to the surgery, Inners was an avid bike rider and very active person who enjoyed the outdoors, the complaint states. His obituary states he was the founder of DRI Machine Shop Inc. in Hanover, and he enjoyed traveling and attending jazz festivals with Woods.

Vincent Karst's open-heart surgery took place  March 9, 2015, at York Hospital, according to the complaint, and he felt well through July 2015.

Karst became increasing tired toward the end of August 2015, the complaint states, and he suffered from a loss of appetite and low energy, spending several days just lying in bed.

During September 2015, Karst's symptoms increased to include unexplained fevers, chills, night sweats and vomiting, and he noted he just wanted to "fall asleep and not wake up," according to the complaint.

Karst was in and out of York Hospital in October 2015. His blood cultures tested negative, and he was diagnosed with dehydration, the complaint states.

Even after Karst received a letter in late October from WellSpan informing him about the risk of NTM infection, no specialists suspected contamination when he was admitted on Nov. 20, 2015, for "persistent leukopenia," or reduction in white blood cells, according to the complaint.

Karst was informed  Nov. 27, 2015, about a preliminary positive test for mycobacteria and started on antibiotic therapy, which the complaint states has serious side effects, including vision and hearing loss that have already begun to manifest.

Claims: Both suits are making defective design and failure-to-warn claims, among others, against LivaNova and negligence claims against both LivaNova and York Hospital. Both parties are seeking in excess of $50,000, according to the complaints.

Each suit chronicles the timeline of when LivaNova and WellSpan became aware of certain events the plaintiffs allege should have led each to act sooner.

Among those events are an "Important Information" letter Sorin claimed it sent July 14, 2014, alerting users of potential contamination issues and urging them to follow cleaning protocols. WellSpan officials previously said they could not find the letter.

WellSpan spokesman Dan Carrigan said the company does not comment on active or pending litigation, but their focus continues to be on the safety and well-being of its patients.

Carrigan said the company responded swiftly when it learned of the potential issues and has since provided a comprehensive set of resources to those affected including a dedicated nurse's center, call line and specialized clinic.

Kline said he is representing others who suffered "significant injuries" as a result of the contaminated devices, and a news release from his firm states that this is "the first of potentially many lawsuits."

Two York County men already filed a $5 million lawsuit in February against LivaNova in the U.S. District Court for the Middle District of Pennsylvania in Harrisburg.

The FDA has yet to fulfill a Freedom of Information request submitted  June 10 by The York Dispatch, asking for the names of states where the facilities are located.