“As he started playing music, our teachers that have kids at home were gravitating toward the screen, and that’s where the tears came,” Monos said. 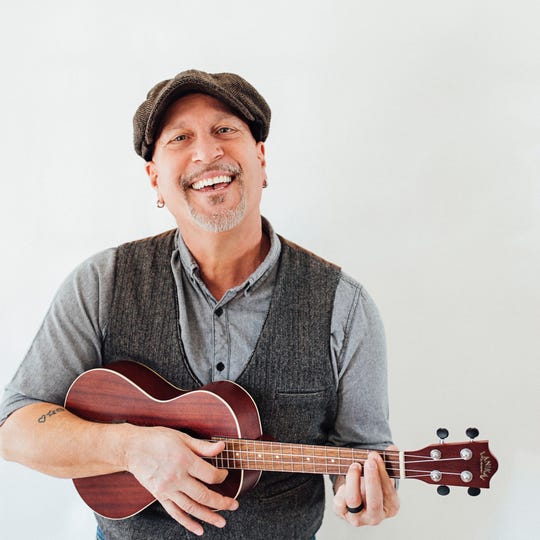 Steven Courtney, a Lancaster-based children's musician who has been performing for 30 years, including songs such as "S is for School," which has appeared on Sesame Street. Courtney will be performing in his home studio on Friday, April 3, 2020, for a virtual concert for K-2 students in York Suburban. (Photo: Submitted)

When Valley View Elementary Principal Todd Monos decided to test out a virtual concert he'd planned for students Wednesday, he invited staff to tune in from home — and they were in tears.

Lancaster-based children's musician Steven Courtney — a 30-year veteran whose songs have appeared on "Sesame Street" — played for them over Zoom in preparation for a Friday show for students, and it was a powerful experience.

“As he started playing music, our teachers that have kids at home were gravitating toward the screen, and that’s where the tears came,” said York Suburban's Monos.

The music had a calming effect in a stressful time, a global pandemic — but it was seeing the children tune in from their respective homes and start dancing that was truly moving, he said.

"The nation’s youngest learners are, in many districts, being asked to mentally process this global crisis while also navigating the necessary world of remote learning," a news release states.

Remote learning for grades K-5 just started Wednesday, and unlike older students, who have been using Chromebooks at home and in the classroom, they are relatively new to online learning.

"Teaching online is really cool," Monos said, but for both teachers and students, "It’s also brought an unbelievable amount of stress."

Courtney has played at district assemblies before, and when he put out a Facebook post about wanting to do a Zoom concert — his first one ever — he and Monos started brainstorming.

The musician will perform for K-2 students from Yorkshire and Valley View elementary schools in three sessions — one for each grade — on Friday beginning at 10 a.m., helping to ease the social emotional transition after they began learning from home on Wednesday.

“I’ve got a couple funny things I do in that lag time of getting started,” Courtney said, such as puppets acting as his stage crew.

He will be in his home studio with a guitar and harmonica, doing 15-minute to 20-minute installments for each of the grades, with interactive touches such as clapping or jumping. 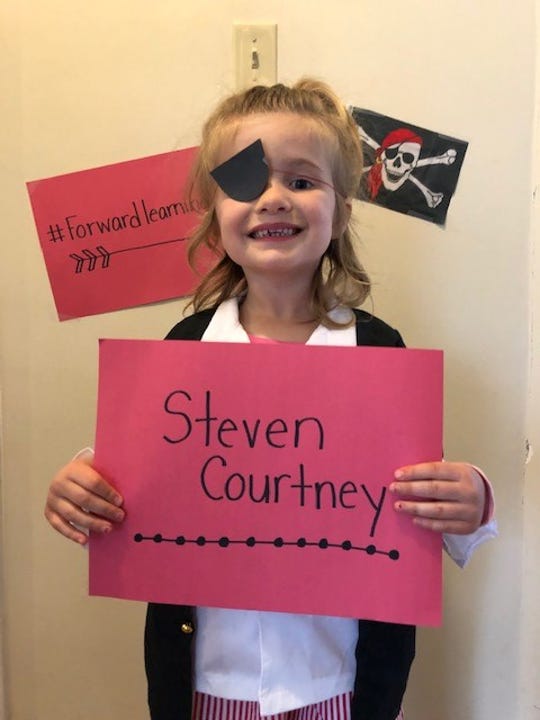 Alyssa Morrow, 5, daughter of York Suburban second grade teacher Lexi Morrow, holds up a sign in preparation for children's musician Steven Courtney to perform his pirate song on Friday. Courtney will be performing a virtual concert for students on Friday, April 3, 2020. (Photo: Submitted)

Though he's done some shows over Facebook Live, those weren’t as interactive, he said. On Zoom, he can see the audience and play off  their reactions, though he won’t be able to hear them.

"If you can picture the Brady Bunch grid … basically that’s what you’re seeing," Monos said, adding that each session can hold about 220 students, so "it will be like popcorn" on the screen.

Courtney said his music is about encouraging education of character — such as empathy and compassion — and also being mindful in the moment and present.

“My main thing is just sharing love and kindness and friendship to music,” he said.

"It’s a message of, 'this is where we are for now,' Monos added, saying, "It’s important for our families, students, parents to hear that it’s okay.