“We are attempting to align our costs with revenues,” said state system spokesman David Pidgeon.

Early retirement is the latest effort by the Pennsylvania State System of Higher Education to reduce costs as universities and colleges throughout the country face declining enrollment.

The state system's 14 universities — including Millersville and Shippensburg — will encourage full-time faculty to retire by increasing sick day payout based on years of service if they retire by Aug. 14.

For example, employees who have 50 paid sick days would be paid for 125.

The system's governing board on Thursday, Jan. 16, approved the early retirement incentive in collaboration with its faculty union. It pairs with a three-year phased retirement pilot now in its first year, approved by the system this past summer.

Only 34 employees have signed up for that pilot so far, officials said. Those employees would also be eligible for the new retirement incentive, provided they retire by Aug. 14.

"We’re willing to put it in front of people," said Kenneth Mash, union president and on-leave faculty member at East Stroudsburg, of the latest retirement incentive.

Mash said members recognize the fiscal challenges that confront the system, but compared to a Penn State retirement incentive that offered a year's salary, it's not a huge payout for individuals.

“We are attempting to align our costs with revenues,” said state system spokesman David Pidgeon.

State lawmakers and officials have been eyeing cost-cutting measures. Staff salaries and benefits make up 85% of the state system’s budget. 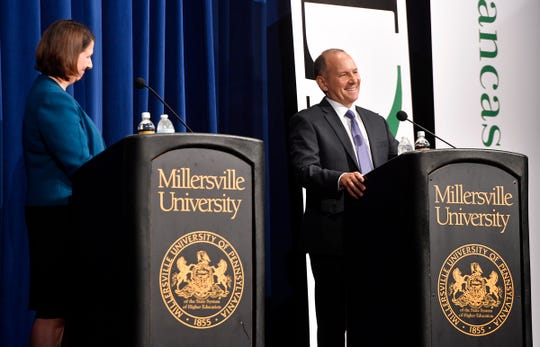 At least 200 out of 900 eligible full-time faculty members would need to agree to the option by March 2 or officials will nix the idea, Pidgeon said.

Faculty would need to rescind their retirement plans no later than April 10.

"We’re a little bit ambivalent about the whole thing," Mash said. Members ratified the proposal but, "I think, however, that there’s some real skepticism over whether that number 200 is attainable."

Pidgeon could not give a firm number on the cost savings expected by that number of early retirements.

It might depend, for example on who is retiring. if the retiring members come from high-demand academic programs, the universities might need to hire replacements.

"It's a rather fluid number right now," he said. "There are a number of factors that will play into that."

Declining enrollment has definitely been a motivator of recent adjustments, Pidgeon said. Collectively, the system's universities have seen enrollment drop 20% since 2010.

Pidgeon said early retirements are only one of the measures the system plans to employ to save on costs in the coming years.

Another is creating a data sharing system, which would centralize departments such as human resources, financial aid, facilities management and information technology, reducing cost duplicates.

"You can imagine what it’s like when you try to compute 14 different spreadsheets," he said.

But the gap between cost and revenue also depends on state funding, Pidgeon said.

State funding covered 63% of its education and general fund budgets when the system was founded in 1983. That number is 28% now.

Pidgeon said officials are seeking a general education funding appropriation of $487 million — a 2% increase over the previous year — and $20 million toward a five-year, $100 million program to streamline systems.

Within about eight years, it could bring in a return on investment of up to $120 million in total savings, he said.

Mash agrees that more funding is needed, as the state is 48th in the country in per-pupil spending for higher education, as covered in a December state House Democratic Policy Committee Hearing.

Though 200 retirements might seem like a lofty goal, it’s not wildly different from the 120-130 retirements the system sees each year. Pidgeon said he's even seen that number as high as 175.

When asked if employees could expect pay cuts or layoffs if the retirement incentives fail, Pidgeon could not say.

“It’s a good question. I cannot engage in any speculation right now; it would be highly inappropriate for me,” he said.

But officials in December did approve a collective bargaining agreement with its faculty union that would see pay increases through 2023, according to the state system website.