"I think if people are going to apply for financial aid, they will do so no matter what steps it takes," she said. 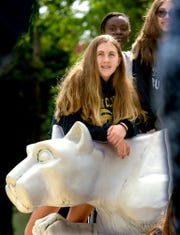 Students pose with the Nittany Lion sculpture during the Pathways to Your Future: Exploring STEAM Careers event at Penn State York Friday, May 10, 2019. Over 200 seventh-grade girls from 28 area schools participated in the program which highlighted science, technology, engineering, art, and mathematics (STEAM) careers. Industry leaders administered the workshops during the program, which is in its 23rd year. Bill Kalina photo  (Photo: Bill Kalina, The York Dispatch)

Prospective college students will soon face a much easier process for getting financial aid to attend their university of choice.

Students can now bypass up to 22 questions on their Free Application for Federal Student Aid when they apply this spring, thanks to the Future Act, which was signed into law by President Donald Trump last month.

"You can lay on your couch and do your FAFSA," Dunkel said, noting that students can now complete the applications on their phones — a huge departure from the process in place when he applied.

"We had paperwork laid out all over the kitchen table, and it was a nightmare," he said.

The Future Act — which stands for Fostering Undergraduate Talent by Unlocking Resources for Education —  passed the House of Representatives 319-96, followed by a unanimous Senate vote before it was signed Dec. 19.

FILE - This April 13, 2014, file photo shows the Internal Revenue Service (IRS) headquarters building in Washington. 2019 was another tough year for the IRS, according to a new federal report. Burdened with years of budget cuts and a recent increase in workload to implement a new tax law, the IRS struggled to deliver on its mission in the past fiscal year. The annual report from the Office of Taxpayer Advocate found that in the 2019 fiscal year, among other problems, the agency failed to collect billions in unpaid taxes. (AP Photo/J. David Ake, File) (Photo: J. David Ake / AP)

“It represents a bipartisan consensus that is always welcome but increasingly rare,” said American Council on Education President Ted Mitchell in a statement after the House passage.

The biggest changes students will see on the form is the "data retrieval tool," allowing students to pull tax information directly from the Internal Revenue Service, Dunkel said.

Dover Area High School counselor Tara Focht said she doesn't think the changes will have too much of an effect since the process improved a lot once it moved online.

"I think if people are going to apply for financial aid, they will do so no matter what steps it takes," she said. "Some of our students and parents struggle with the process regardless, so we support them through the process."

More: Going back to school? Here’s how to pay for it

Mitchell said the Future Act will also streamline the process of income-driven student loan repayment — which involves payment plans based on family size and income.

To enroll and stay in these plans, income must be recertified annually, according to an article by Sarah Sattelmeyer and Spencer Orenstein, of The Pew Charitable Trusts' project on student borrower success.

About 8 million people are now enrolled in income-driven repayment plans, and millions have missed at least three months of federal loan payments, with more than 1 million defaulting — meaning they have gone about a year without any payments — each year, the article states.

Dunkel warns, however, that many students who use income-driven loan repayment plans get denied at the final stages, so it's best to follow a traditional plan.

The FAFSA simplification will save an estimated $2.8 billion over a decade, which will fund another component of the bill: permanent appropriation for minority schools. The annual appropriation of $255 million expired Sept. 30.

Pennsylvania has two historically black colleges, a few predominantly black institutions and one Hispanic-serving institution, according to the University of Pennsylvania's Graduate School of Education.