"We had been given warning," said Krum, noting that without the labor force to support it, she's not surprised the project came in over budget. 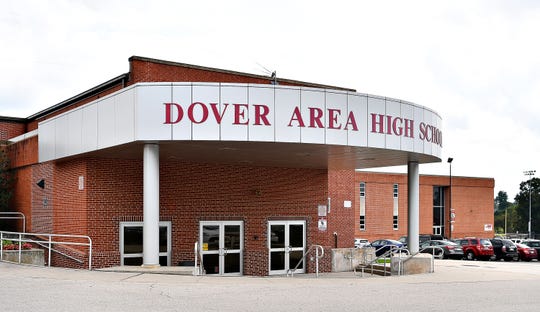 Bids for a Dover Area School District project to convert the old high school into a middle school were significantly higher than district officials anticipated.

The bids, which came in Tuesday, Jan. 7, would put the project budget about $789,000 over the $5.7 million price tag that was initially accepted.

And that's only including an estimate of the cost of electrical work, as the request for proposal failed to garner a single bid. That contract will be rebid, with the second round of bids due back Thursday, Jan. 16.

"We did reach out to many different contractors," said Scott Cousin, senior project manager at Crabtree, Rohrbaugh and Associates, the firm managing the project for the district. "The sentiment on the street was everybody was already committed for the next summer."

Without the final contract, the board cannot take action until its next meeting Jan. 23. This will push back the project start by three weeks, said district spokesman Brad Perkins, but will not affect completion dates.

In conjunction with construction on the district's new high school, the majority of the middle school project should be done by early to mid-August, with some elements stretching into the fall, he said.

Crabtree, Rohrbaugh and Associates estimates the electrical contract will be about $1 million. Combined with the other three low bids, that would put the project total at about $6.64 million. The original estimate for the project was $5.7 million.

High demand: A robust national economy might be at fault, officials said, because contractors are too much in demand to bid on capital projects.

The lowest bidder for general contracting was Dillsburg-based eciConstruction at about $3.94 million. Montgomery County-based Myco Mechanical put in the lowest bids for both HVAC at about $1.19 million and plumbing at $507,000.

"We had been given warning," said Superintendent Tracy Krum, noting that without the labor force to support it, she's not surprised the project came in over budget.

The construction industry is very busy, Cousin said, and in talking to contractors, the beginning of the year is even busier than it was when the project went out to bid in mid-December.

"These are some of our fears that, as the economy is coming back, everybody is deciding to go forward with the projects they've been putting off for so many years, so we really have more work in the industry than is able to be done by the workforce out there," Cousin said.

Following the recession in 2008, the construction industry nationally saw huge drops in employment, dropping to about 5.58 million employees in January 2010 compared to 6.57 million in January 2009, according to the U.S. Bureau of Labor Statistics.

Numbers began to slowly rise again in 2012, and by January 2018 had breached 7 million employees. They have continued to climb in recent months.

A January 2020 York County profile from the state's Department of Labor & Industry showed the county's unemployment rate is 3.8% — even lower than the state's 4.3%.

Joint projects: Only one of the four primary contractors working on construction of the district's new high school put in bids for the middle school.

"When we originally were estimating this, we were factoring that we would have an economy of scale of having contractors across the street that would have less overhead to do a project like this, but they just didn't have the capacity to make it work," Cousin said.

National labor shortages are affecting the  workforce in York County, and that means increased labor time, especially on a complex project with a lot of labor-intensive items, he added.

A multi-phase plan to turn the district's old high school into a new middle school is more complicated and less attractive, he said.

This 3D aerial render of the recently-approved new Dover Area High School will include two stories of classrooms surrounding a courtyard that will be used for educational purposes. (Photo: Submitted.)

The high school project was bid in 2018, when the economy was just beginning to rebound, Cousin said, adding that project came in significantly under budget.

Cousin said he has already begun to discuss potential cost savings with low bidders, and Krum said district officials will likely consider as many options as they can to reduce the total.

The electrical contract does have two interested bidders, but since they know there were no bidders the first time, it might be even harder to get competitive costs, Cousin said.