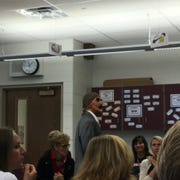 A Southern York County School District principal was disciplined after she wore blackface during a staff team-building exercise last summer.

A district statement notes Southern York was made aware of Twitter posts by a former food service contract employee stating it "swept under the rug" a "blackface" incident.

@sam_ruland The principal at Friendship Elementary school in Glen Rock pa held a meeting in black face. This is not ok! The superintendent is a good friend of hers and did nothing about it.. Name Lisa Boyer pic.twitter.com/gUMQrM4bL7

Superintendent Sandra Lemmon sent a letter to the district community Thursday, Jan. 31, in response to news coverage on the incident, which occurred Aug. 20, when students were not in school.

The incident: According to the letter, Boyer wore a man’s suit, a costume cap to cover her hair, a fake mustache and "makeup on her face to darken her skin color."

Lemmon did not refer to the makeup as blackface but noted that teachers found it offensive, and the situation was immediately investigated after it was brought to the administration's attention.

"This matter was not 'swept under the rug.'  It was promptly addressed — and it was made clear that this incident was inappropriate within the school setting," according to the district's statement.

Lemmon's letter added that Boyer was disciplined within days of the incident and was told by both the board and administration that her actions violated the "letter and the spirit" of the district's nondiscrimination policies.

Lemmon and Boyer did not immediately respond to calls for comment on this story. 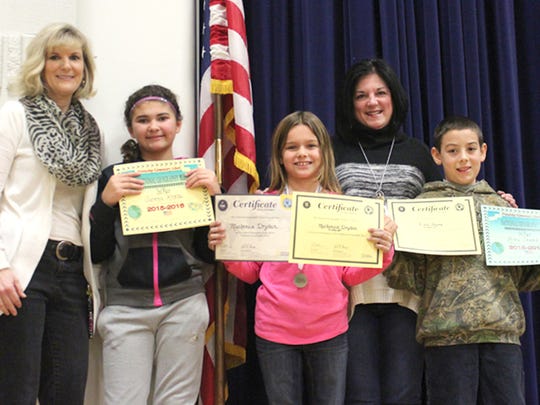 Blackface: The practice of wearing blackface is racist in its origin, according to the National Museum of African American History and Culture.

"Comedic performances of 'blackness' by whites in exaggerated costumes and make-up, cannot be separated fully from the racial derision and stereotyping at its core," an article on the museum's website explains.

It goes back to the first minstrel shows in 1830s New York, where white performers would mimic enslaved Africans, accentuating negative stereotypes such as laziness, ignorance, thievery and cowardice.

According to the museum, colleges and universities across the country still see blackface performances from students and professors — who insist they intended no racial hatred.

Virginia’s governor on Saturday vowed to remain in office despite widespread calls for his resignation after a photo surfaced on a school yearbook page showing a person in blackface and another wearing a Ku Klux Klan outfit.

Gov. Ralph Northam, a Democrat, said at a news conference he had prematurely apologized for appearing in what he called a “horrific” photo. The image appeared on Northam’s profile page in his 1984 medical school yearbook.

Making amends: Boyer apologized to staff for the insensitivity and implications of her actions, and in conjunction with administration  is voluntarily taking steps to increase her diversity awareness, the district's letter states.

She is listed on Southern York's districtwide and Friendship Elementary School 2018-19 diversity committees, though it is unknown whether or not this was a result of the incident.

The letter also recognizes that the district has many K-12 cultural and diversity initiatives and ongoing professional learning opportunities but needs "continuing improvement and embracement in this area."

York NAACP President Sandra Thompson said Saturday that wearing blackface was "extremely poor judgment" on Boyer's part, but she added that the superintendent and school board members have since reached out to her to help them with their cultural sensitivity education efforts.

"I am encouraged by the school district's efforts" to work with her to improve existing programming, engage other programs and communities and focus on outreach, she said.

Thompson said she recognizes there's often a gap in community understanding of cultural insensitivities such as blackface, and the best thing to do is communicate openly with those who are different.

The school district's letter notes it will continue to work with groups such as the NAACP and the Pennsylvania Human Relations Council "to see what additional steps might be taken to grow, learn and strengthen the respectful and inclusive environments in our schools."