“If there’s an ongoing bullying issue and it’s brought to my attention, it’s going to be addressed," Davies said. 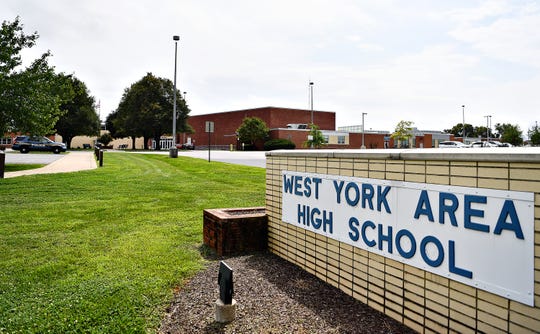 The statement sent to families and staff in the district on Wednesday, Jan. 30, follows a meeting on Monday, Jan. 28, at Leg Up Farmer's Market, in which former and current parents in the district shared stories of their children being bullied — in some cases, for years — without sufficient district interference.

These concerns were sparked by a Dec. 21 incident on an elementary school bus in which 10-year-old Ted Grove was slapped, punched and held in a choke hold, according to his mother, Rhonda Lucky.

However, one West York Area school board member who saw the bus security tape disagreed with the characterization of bullying.

"If you saw the tape, you’d see it’s not bullying," said David Strine, adding that in the video, Ted was instigating other students.

Board Treasurer George Margetas said, to his knowledge, seven of the nine board members have reviewed the video, as well as West Manchester Township Police and the York County district attorney's office, neither of which saw any criminal activity.

The administration did not think further action was warranted, and Margetas — who noted that for all comments he was not speaking on behalf of the board — said he stands by their decision.

Since Lucky shared her story, at least 18 parents have shared their own bullying issues with her attorney — claiming a lack of response from the district, and a failure to enforce policies and discipline. The attorney is considering a class-action lawsuit.

Board President Todd Gettys said when a lawsuit is involved, it limits what the district can do. A better route would be working together with parents, because nobody on the staff or board thinks bullying is good — they all want to minimize it.

Four other board members did not immediately return phone calls or emails asking to respond to parent claims. Board members Lynn Kohler and Suzanne Smith directed The York Dispatch to Gettys.

A big issue: “We understand that there’s a big issue,” district Superintendent Todd Davies said of bullying, when reached by phone Wednesday.

"We have been working in trying to be more consistent with our discipline across the district,” he said, but he added it will take time to identify areas that need to be addressed and implement new policies effectively.

Gettys echoed his thoughts, adding that disrespect and discipline have been on the radar for a while.

Margetas said a board meeting this month was the first time he saw parents come forward about bullying, and though he's sympathetic to parents and does not take bullying lightly, he does not believe West York's  problem is more severe than other districts.

Todd Davies was approved unanimously by the West York school board in a special meeting Monday night. (Photo: Junior Gonzalez)

Davies said the district's already seen some improvement in the middle school climate, with fewer discipline referrals, but it's also important to address issues systematically through proactive measures.

For example, West York added two school resource officers, additional staff in the elementary and middle schools and specialists to replace guidance counselors in classes such as art and gym; and the district initiated a soft start in classrooms.

The soft start allows kids to go directly to their classrooms at the beginning of the day, which creates less of an opportunity for behavior to escalate in large groups and more of a chance for teachers to connect with students, Davies said.

According to the Wednesday letter, drivers are now mandated to report all incidents to building principals, and the district's new transportation policy states that students will be suspended for behavior such as fighting on the second offense.

Some parents have asked for bus aides to help the driver maintain control, and Gettys said the board is planning to have bus monitors rotate between routes to assist drivers, especially on one route that's had extensive issues.

At monthly bus meetings, administration also looking into discipline training for drivers, reduce bus time and closing the loop of communication so that drivers are aware of how reported incidents are resolved and can learn how to reduce them in the future.

Communication: Davies encouraged parents and community members to email or call him about areas where they would like to see change, noting “the best ideas come from the community.”

In his letter, he urged parents to immediately report bullying to the building principal.

“That is probably the most important thing,” he later explained, because the principal is in charge of the building, aware of the climate of that building and has control of the resources to investigate.

If parents have had bad experiences, they should start there, but if there’s any area they feel the district has not dealt with, he encourages them to call his office, he said.

"We can’t change the past," Gettys said, but if the board, administration, parents, teachers, bus drivers and the community work together, they can make the district the best place for students moving forward.