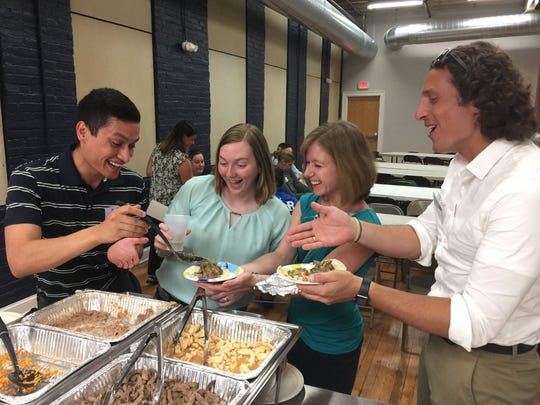 The mission of York Young Professionals is to be a catalyst for those seeking connections where they live, and its members hope to continue that tradition for another 20 years.

One of several groups for young professionals in the region — there are also groups in areas including Hanover, Harrisburg, Lancaster, Reading and the Susquehanna Valley — the York organization is celebrating its 20th anniversary this year.

When she joined five years ago, there were about 40 who attended the group's monthly socials, Gross said. Since then that number has doubled, and total membership sits at about 200.

All job fields are welcome, and though there's no age limit, members must be 21 to join and typically average between ages 25 and 35. Anyone who feels they would find value in the group can become a member.

More information about membership can be found at yorkyp.com.

Social and professional: Gross describes it as a social professional networking opportunity.

During socials on the third Thursday of each month, gatherings that serve about 80 to 100 people, the organization usually features new or little-known businesses, opting to serve food from a nearby restaurant at a location that can host a bigger crowd.

But the group also organizes smaller get-togethers because "not everybody is as comfortable in a large group setting," Gross said.

Meeting up with members from a variety of industries and services can be a great resource for professional development and what Gross dubs "Adulting 101."

As questions come up in life — such as, "at what point do you need to be thinking about retirement or homeowner’s insurance" — members with expertise in those subjects can provide insight, she said.

Creating roots: But the group does more than just establish professional connections — it helps create roots in the community.

"A lot of people build long-lasting friendships," she said, adding that if they want to explore what York County has to offer, they now have people who will join them.

One event she recalls as a favorite that helps form those connections is the annual York Young Professionals Foot Rally, a competitive scavenger hunt that helps members and nonmembers alike learn more about York County's history and places.

Celebration: To further those connections, the organization has several special events planned to commemorate its anniversary year in 2019.

In the summer, the group will host the Regional Young Professionals Mixer — an annual event planned by regional young professionals boards that typically draws about 50 to 100 members — and a "Live, Work, Play" walking tour that will highlight area residences, businesses and restaurants.

At the end of the year, York Young Professionals will host a New Year's Eve bash — which might turn into an annual affair if successful, Gross said.

But some celebrations will last throughout the year.

"We felt like with our 20th anniversary, it was a great time to give a kind of fresh new design and look to the logo," Gross said.

The tagline "Twenty Years Young" will only be included in 2019, but the design will remain for years to come.

Over the next year, Gross hopes to share the organization's history and story with members as they look back on two decades, and her main goal for the future is to continue with what the group does best.

"I think that we just want to really make sure we are creating quality relationships and connections within the community, finding mutually beneficial partnerships and helping to do our part to be part of the revitalization of the community as a whole," she said.