When Wanda Miller first came to the MLK Sunday Supper, she left with an idea. 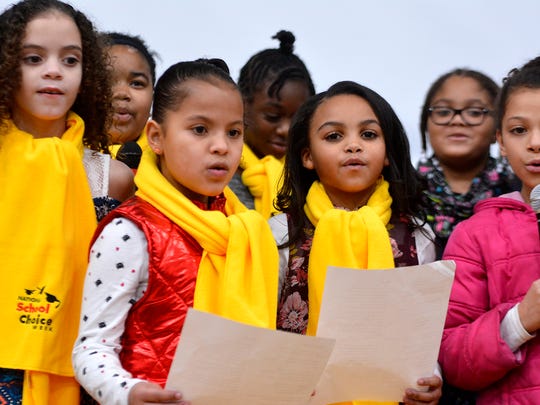 When Wanda Miller first came to the MLK Sunday Supper, she left with an idea.

She wanted to create a television show that didn't focus on opinions but on fairness — an opportunity for everyone to have their voices heard.

That idea grew into the White Rose Community Television show "Knowledge is Power," and it's not the only idea to be born at the annual dinner held at Lincoln Charter School.

The event is returning for its seventh year on Sunday, Jan. 20, and the school's community outreach director, Anne Clark, said the best thing about the gathering is the ideas that spring from it.

At its core, the supper — which encourages diversity and focuses on issues that affect the York City community, such as homelessness, health equity and racial inequality — is centered around giving everyone a voice.

Background: The supper follows the national tradition of America's Sunday Supper, a program through the nonpartisan Points of Light volunteer organization, in which groups throughout the country hold dinners inspired by the Rev. Martin Luther King Jr.

According to the organization's website, the idea came from King's "vision of people from diverse backgrounds interacting on personal levels."

A national mayor's initiative brought the idea to former York City Mayor Kim Bracey, who chose Lincoln as the host for the event, Clark said. After Bracey's departure, the school's administration agreed to keep the tradition alive.

Lincoln's dinner, always held around the Martin Luther King Jr. holiday because of its importance to the local community, is typically one of the larger incarnations of the national event.

Third grade teacher Aubrey Werley, left, ties a "Celebrate Choice" scarf on Tanaishka Diaz-Berrios, 8, before the start of the annual MLK Sunday Supper at Lincoln Charter School, Sunday, January 14, 2018. Lincoln Charter School will be celebrating School Choice January 23 and all their students will be receiving the scarves. John A. Pavoncello photo The York Dispatch
Fullscreen

Three years ago, it was the largest in the country, Clark said.

The event continues to grow, with about 10 to 15 new community partners this year and all of last year's partners returning. Clark said attendance tends to reach between 300 and 400 people each year, and she anticipates this year it will hit that maximum.

It's an opportunity for community organizations to meet up and share the work that they've been doing and for them to hear from the community, she said.

Each partner has agreed to collect hygiene products for the homeless community, which will be donated to the Mr. Sandy Homeless Veterans Center and The Coffee Spot. Entry is free, but each guest is asked to bring an item for donation.

The homeless population continues to rise in the city, Clark said, adding, "I hope that this brings them hope."

Discussion: The event will include dinner — with a vegan option available — and a raffle, and community activist Jameal Alexander and Lincoln Principal and CEO Leonard Hart will facilitate a conversation.

Every year, a movie featuring an issue important to the York community is shown, and discussion follows, allowing community members to comment on what they saw or offer up their own ideas and concerns.

Clark said this year's choice will likely be "America to Me," a documentary series based on a Chicago high school, highlighting the differences between teachers and students and how race plays into education.

Lincoln Charter will give a free T-shirt sporting the school's theme of "I believe, you believe, we believe in the York community" to the first 75 guests.

FacebookTwitterGoogle+LinkedIn
PHOTOS: MLK America's Sunday Supper: Where do we go from here?
Fullscreen

Volunteers: New this year is the recognition of volunteers by the 10,000 Acts of Kindness organization.

Each of the event's 20 to 30 volunteers will receive a kindness coin, which allows them to attend the 1.8-mile-long city dinner this summer.

More: Students showcased in first of series of projects for 10,000 Acts of Kindness

Clark said this event is also Lincoln's opportunity to give back to the community — a "schoolwide initiative" in which everyone, including student ambassadors, does their part — so they are not counting themselves among the volunteers.

The hope is always to make everyone feel welcome — especially those who say of the topics, "this applied to me," Clark said. "(Their voices are) always so powerful."