Former Thackston board president Michael Mehosky owned a business that contracted with the school.

Helen Thackston's Charter School is at risk of losing its charter for multiple issues, including allegations involving self-dealing by its former board president. 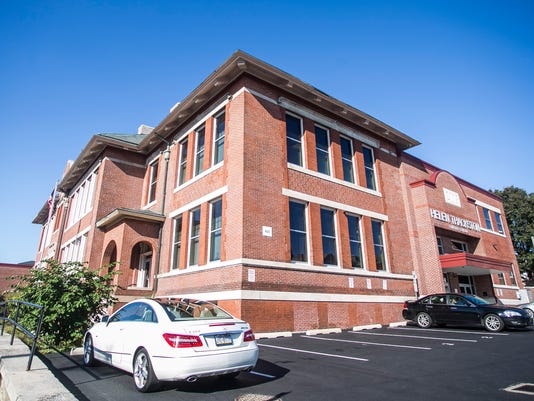 The future of York City’s Helen Thackston Charter School is in doubt, in part, due to allegations of self-dealing by the school's former board president.

The York City School District alleges Thackston and its board members violated the state's Ethics Act in 2013 by approving a contract with a company started by the former board member.

In a June resolution moving to start revocation proceedings for Thackston’s charter, the district school board stated a charter school board member failed to disclose his ownership stake in GeoSource Capital LLC, which Thackston contracted with during the 2013-14 school year to provide homeland security curriculum services.

Minutes of a special meeting by the Thackston board on Aug. 19, 2013, show it unanimously approved a one-year contract with GeoSource Capital. The minutes do not indicate what services the company was supposed to provide or how much the company was to be paid.

The York City school board’s resolution alleges the contract was for $130,000.

The resolution did not explicitly name the board member — providing only the initials M.M. — but an investigation by The York Dispatch found the person to be former Thackston Board President Michael Mehosky. 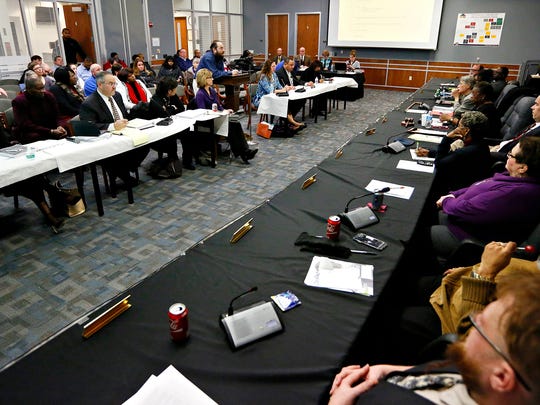 A Certificate of Organization filed with the Pennsylvania Department of State shows that Mehosky created GeoSource Capital in 2010.

Reached by email Monday, Mehosky stated that he and a partner started the company in March 2010 as a small, part-time financial-services provider to help fund green energy projects.

Mehosky added that he sold all of his interests in the company to another stakeholder in July 2012 to avoid a conflict of interest with his new employer, GE Capital, and before becoming Thackston's board president.

Department of State records show the company is still active and registered to an address on Legacy Lane in York Township, which is a residence previously owned by Mehosky, according to county assessment records.

Ethics Act: Business owners are not required to submit any paperwork to the state when they sell interests to other stakeholders within a limited liability company, and a company is not required to inform the state if it changes its address, according to a Department of State official.

Mehosky did not disclose his ownership interest on his Statements of Financial Interest form, nor did he disclose his interest during the special meeting when the board approved the contract, according to the York City school board’s resolution.

All public officials and employees in the state are required each year to submit a Statement of Financial Interest, which must include all sources of income and employment, according to the state's Ethics Act. 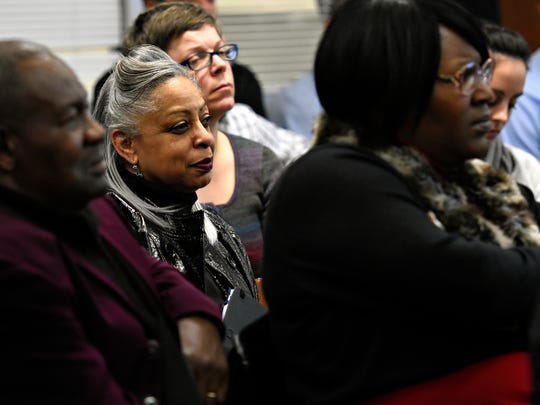 While Thackston’s board members are not elected, unlike public school board members, state law explicitly states that charter school administrators, elected or appointed, are considered public officials under the Ethics Act and are therefore required to submit Statements of Financial Interest.

In Pennsylvania, charter school applications must specify the proposed school’s unique mission and curriculum. In their 2008 application, Helen Thackston Charter School organizers stated the school’s focus would be on homeland security — a first in Pennsylvania.

Students were to receive training and instruction on topics such as emergency response, computer security and legal issues related to homeland security.

“This is where we are today, post-Sept. 11,” said Oscar Rossum Sr., who at the time was Lincoln Charter School’s board president and one of the main proponents of the Helen Thackston Charter School. “We want to get kids hands-on experiences.”

To what extent the school provided that experience is unclear.

The York City school board has referenced a lack of homeland security training in the resolution to begin revocation hearings.

GeoSource: Mehosky recommended GeoSource be considered to help address the school's deficiencies, he wrote, because the company's new owner and partners held a considerable background with government, military and defense agencies.

He added in his email that he disclosed his previous relationship with GeoSource's presenters to board members prior to the company's presentation, and he did not receive any compensation related to the contract.

A 2013 Facebook post by Lincoln Charter School announcing the partnership between Thackston and GeoSource provides three GeoSource principals who would be involved in the partnership: Sam Brown, a former federal government operative; Lt. Col. Randy Marcoz, a retired Army intelligence officer; and Courtney West, a former Marine and FBI agent.

Mehosky did not specify whether any of these men was his original partner.

Contact information for West could not be located, and multiple voicemail messages left for Brown and Marcoz were not returned.

Brown is currently working for a private security firm based in Colorado, and his online company profile touts his development of a "program for at-risk youth in an inner-city school in York, PA," where he trained teachers and students in resistance to bullying and responding to threats. 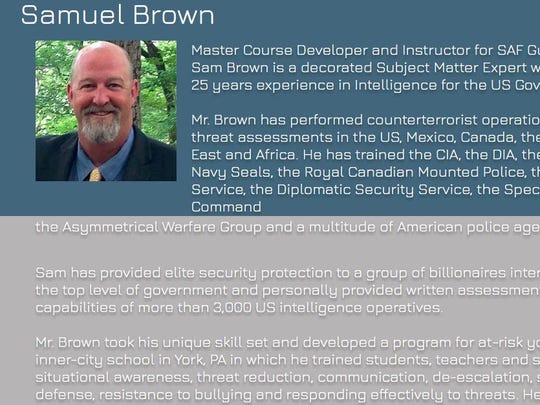 A screenshot of Samuel Brown's online company profile. Brown was one of three principals from GeoSource that was supposed to provide homeland security training to Helen Thackston Charter School. (Photo: Screenshot)

GeoSource's website does not currently work, but archived snapshots captured of the site in 2013 and 2014 show that the company's mailing address was in Charles Town, West Virginia, with office locations in Tampa, Florida, and Washington, D.C.

John Reisenweber, executive director for the Jefferson County Development Authority in Charles Town, West Virginia since 2012, said he had never heard of GeoSource or any of the staff members the company listed on its website.

A screenshot from 2013 of GeoSource Capital Solutions' website. The site no longer exists. (Photo: Screenshot)

In addition to Brown, Marcoz and West, Thomas Leland was among other staff listed on the website.

Leland, currently an attorney in Colorado, said that he served as outside counsel for a small project associated with GeoSource, and he had no knowledge of any contract with Helen Thackston Charter School.

The company had posted a local news article on its website after the contract was signed that reported its training at Thackston would be GeoSource's first time working with a school.

Archived snapshots of the company's website also include a calendar indicating GeoSource was scheduled to perform training at Thackston on at least three occasions during 2013: Sept. 30, Oct. 8 and Oct. 22.

No one directly involved with the school's operations at the time has been able to confirm what, if any, services the company provided.

Mehosky did not immediately return a follow-up email asking him to explain the services GeoSource provided, and others who served on the board when it voted on the contract — including Patricia Maher, Dorothy Sweeney, Stephani Brown and Greg Ford — could not be reached or did not return requests for comment.

Thackston's principal at the time, Khaleel Desaque, currently serves as director of school improvement for the state Department of Education. He responded to questions via email Tuesday stating that the situation was a board matter and referring all further questions to his attorney, Sandra Thompson, who could not immediately be reached.

The York City school board's resolution states that in March it asked Thackston to provide copies of all contracts with GeoSource no later than April 7, but Thackston's counsel has responded that it could not find any such contract. 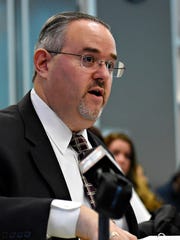 The York Dispatch has submitted a Right-to-Know request to Thackston's solicitor seeking all available information regarding its contract with GeoSource.

Audit findings: Difficulty in locating contracts was among many issues reported in a scathing 2015 audit by state Auditor General Eugene DePasquale.

The report, which covered July 2010 through October 2013, stated that the school was unable to provide auditors with written contracts or agreements with vendors, though it specifically referenced vendors who provided therapeutic services.

The audit also found that several board members did not file or were filing incomplete Statements of Financial Interest, though it did not identify which specific members. 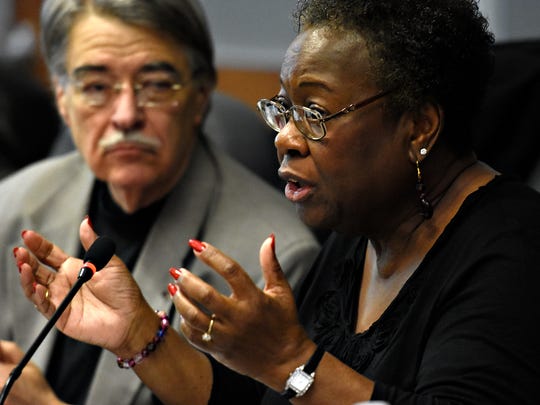 When reached for information, York City school board president Margie Orr said she and other board members are “not privy” to information regarding GeoSource beyond what was outlined in the resolution.

Helen Thackston will hold its next board meeting July 27. Thackston has not been informed of revocation hearing dates or the appointment of a hearing officer, according to Thackston's solicitor Brian Leinhauser.