The school was evacuated due to a written bomb threat 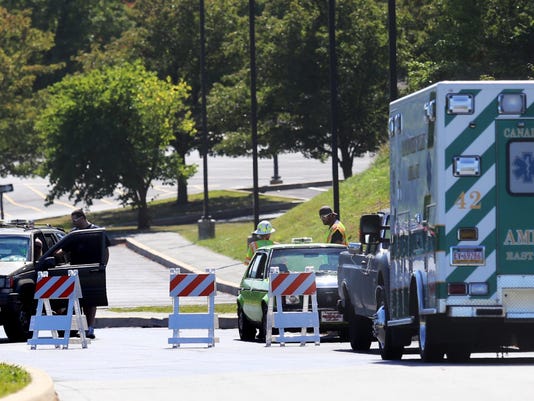 Eastern York High School was evacuated Friday morning due to the discovery of a written bomb threat, the latest in a spate of such incidents in the district.

Students were evacuated to the district's middle school gymnasium just after 11 a.m. Police officers with a K-9 unit were dispatched to the school and searched for any possible threats before students and staff returned to the building. The school was cleared for re-entry at 12:43 p.m.

According to information posted on the district's website, students returned to their normal school day and were dismissed at the normal time Friday. The district said the incident is still being investigated.

The district's middle school has had frequent of bomb threats in the last two weeks.

There were three bomb threats made by three separate persons, two of whom were students who were caught and suspended. Early last week, a fourth bomb threat was made at the middle school. A student was identified in that incident, but the district declined to say whether the student was suspended. Fourth bomb threat in a week for Eastern

Authorities are still searching for the person who made the first bomb threat Sept. 20. The district has asked that anyone with information contact them.

Eastern York High School also was locked down Sept. 26 while police searched for a man they say impersonated a student while entering the building. The suspect is Timothy Justin Hannah Jr., 23, of York City. He is also accused of choking a student in the girls' bathroom.

Some experts estimate that fake bomb threats can cost $9,000 or more, in addition to the loss of instruction time that can seriously disrupt a district and set students back.