By 2018, York Academy Regional Charter School hopes to open a high school across the Codorus Creek.

York Academy Regional Charter School recently purchased property that used to house Pensupreme Dairy with the hopes of building a high school that would open its doors in 2018.

The school would be located between North Beaver Street and North George Street along Hamilton Avenue, across the Codorus Creek from the current school.

The would-be high school property was purchased for $695,000, according to Michael Lowe, the supervisor of instructional development at York Academy. The idea has been in the works for quite some time, as the school has been continually adding grades since its opening in 2011. Starting in the fall, York Academy will teach grades K-7, and it will eventually need a high school for the freshman class that would start in the fall of 2018.

The school's plans need to be voted on by the city's zoning hearing board at its next meeting, which will be at 6:30 p.m. Thursday, July 21, at City Hall. On Monday night, the city's planning commission voted unanimously to recommend to the zoning board that the school be allowed to continue with its plan.

York Academy plans to knock down the old dairy building and the smokestack on the north side of Hamilton Avenue, said attorney Jeffrey Lobach, who represented the organization at the planning commission meeting. The area will be turned into a parking lot for the school, which will be across the street, on the south side of that road.

The new school building would be 28,100 square feet, and the idea is for it to house 75 kids per grade, with three classes of 25 for each year, Lowe said. Right now, 80 percent of the lower school's students are from York City, with the other 20 percent coming from Central and Suburban school districts. Lowe said the school's charter calls for making available a third of the possible kindergarten slots every year for each district, but a relative lack of interest from the two outside the city has meant that their slots went to city students.

Lowe said the incoming kindergarten class will have more from Central and Suburban than the previous ones had.

As is common with charter schools, students are accepted on a lottery system, he said.

Lowe explained that if the academy is denied permits to build the high school, it can go through an appeal process. But at this point, it's all up in the air.

"I would hope that because of what we're doing for and with the city, we would be able to get approval as needed," Lowe said. "The area is being developed, and having a school that supports York City and county students would be a great thing." 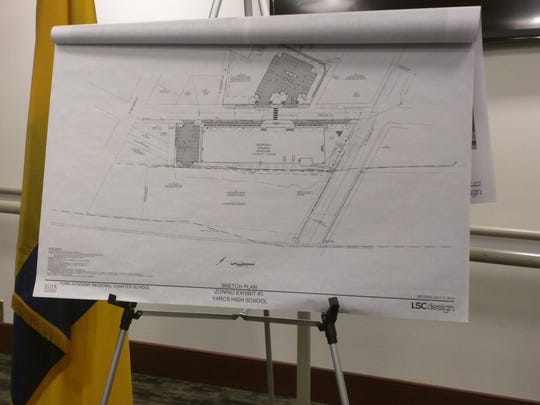 Concerns: One community member who lives very close to the property where the high school would go raised some concerns about having a busy high school on a "side street." Anne Kirby lives on Beaver Street and was concerned that the construction of the school might involve tearing down trees that are near both her home and the proposed high school.

She also worried that a busy high school might create congestion on Hamilton Street. The intersection of North Beaver Street and Hamilton Avenue, as well as the intersection of North George Street and Hamilton Avenue, are very difficult to maneuver, and it is hard to see oncoming traffic, she said. School buses, she said, might experience even more difficulty than average cars.

"I don't have a problem with them expanding, but Hamilton is a side street," Kirby explained. "It gets very slippery in the winter. The intersection with North George is very awkward."

Lowe said he wasn't completely sure that trees wouldn't be cut down in the construction, but he hadn't heard any discussion of the idea so far. As for the harrowing intersections, Lowe said the point had been discussed already.

"The school busing for the high school should not be impacted because the buses will drive off of Beaver, drop off at Hamilton and proceed onto George Street," Lowe said, further stating that studies will be done regarding transportation to look for any other major concerns.

"However, much like every school district, when there are concentrated times for pickup or drop off, you'll have more congestion," he said.

Support: Shilvosky Buffaloe, the city's acting director of economic and community development, lauded the school's plan. He said the city's blight task force had long been trying to do something about the building on the south side of Hamilton Avenue that's going to be torn down, but to little avail. The building's "gateway" position on the edge of the city meant it would be one of the first things people heading south into the city see of York.

"I am utterly delighted to see this acquired by the school — and demolished," said Buffaloe, who added that his son just got into York Academy. "It was a significant blight on our community."

The land involved in the project surrounds Central Family Restaurant to the south and west. Diner owner Karl Spangler said he'd originally been wondering about people from the school parking in his lot all the time, but the presentation York Academy gave to the planning commission assuaged those concerns.

Lobach said the school has an agreement with the city's Small Field on the other side of North George Street to handle parking for bigger events the school might put on.