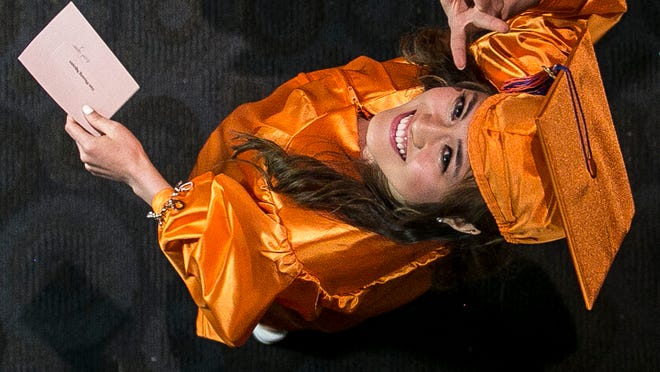 But with all the laughs and cheers during the evening's commencement ceremony, one speaker painted another picture: one of turning darkness into light.

No speech elicited more tears than that of valedictorian Montrel Morgan.

Morgan went on describe life growing up in the city, surrounded by noise — people coming in and out of his home, sirens and violence. The toughest noise of all for Morgan, though, was silence.

"It got quieter when my brother went to jail, it got even quieter when my mom battled for her life," he said. "Silence when my grandfather died, and the silence was deafening when I lost one of my closest friends."

Then, Morgan turned his message to hope, which sometimes was the "single light bulb" in his home that he did his homework under.

Through it all, Morgan prevailed, even thrived, and he wanted that to be what his classmates took away from his speech.

"If I'm able to prove that anything is possible, all of you are capable, too," Morgan finished.

Not all of the night's speakers were so serious. York City School District's guest speaker and alumnus Kevin Jackson entertained the audience with his family-meeting style commencement address.

"This is not going to be a traditional commencement speech," Jackson said. "This is going to be a family meeting, because I'm at home with my family. I'm a Bearcat."

Jackson is the vice president of process, innovation and technology at Wolf Home Products and is beloved among students, faculty, staff and administration at William Penn Senior High School.

Morgan said that Jackson is one of his role models.

Jackson delivered his commencement address to the cheers and laughter of the audience. Following a meeting format, he challenged the students to handle their business, bring their A-game and make sure the world sees their passion.

"Bearcats, let's rock this thing called life," Jackson said. "When we see a limit, let's recognize it and blow it out of the water, because that's what Bearcats do!"

The Rev. Larry Covin Jr. from the Trinity United Church of Christ offered the invocation before the ceremony.

Other speakers for the evening were Ashley Smith, the Class of 2016 vice president, who spoke of meeting challenges head on. Class president Dejanay Givens challenged her classmates to continually reach for the stars and to do all they could to reach their full potential. Salutatorian Ethan Fogleman's speech drew many laughs as he spoke of the typical cliches used for graduation speeches and how they typically aren't true.