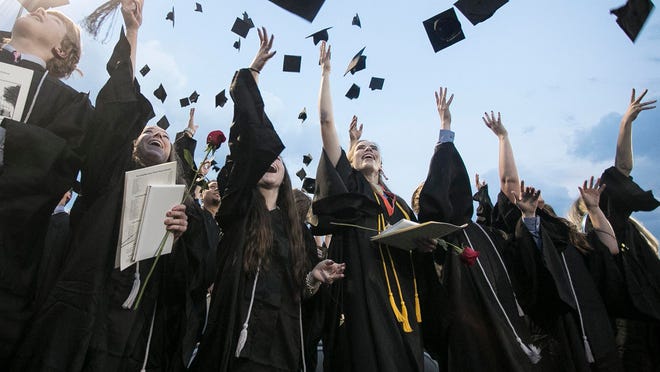 With that, York Suburban High School student council president and valedictorian Devon Hornberger congratulated her classmates Thursday during an evening filled with laughs, cheers and a few tears.

The graduation began with a speech by Hornberger, followed by a speech from Snyder, who started by asking the crowd to close their eyes and think of their first roller coaster ride.

"Now, I know every English teacher out there is hoping that I don't compare high school to a roller coaster ride," Snyder said. "But this speech isn't graded, and I can use as many cliches as I'd like."

Merkle's speech drew some laughs. Typically, superintendents don't speak at York Suburban graduations, but Merkle requested to do so because her son, Thomas, was one of the graduates.

She began her speech by recognizing that most parents there only know her by the sound of her voice on the phone when school is canceled, something she said parents would grow to miss. She then pulled out a phone and let it ring into the microphone.

"Hello. This is Superintendent Merkle calling to let you know that there will be no class tomorrow for the senior class of 2016," she said, as cheers erupted. "I repeat, there is no school tomorrow, or ever, for the class of 2016."

Merkle's speech was followed by a musical break from the high school's concert choir, who sang "Finale B" from "Rent."

Hornberger spoke twice at graduation, once as student council president and once as valedictorian. Her second speech focused on the Chibok girls kidnapped in Nigeria two years ago. She said she often heard complaints from her classmates about school, but the still-missing 200 girls should be a reminder that education is an important right.

Cross ended the student speeches by asking her classmates to reflect fondly on their years and to be proud of their many accomplishments as a class, from fundraising to athletic and academic achievements.

Before the presentation of the diplomas, Ellis made a special speech for the class of 2016, talking of the special bond he had with the class.

"We started this journey together four years ago," Ellis said, referring to his start as principal the same year that the class of 2016 came into the high school as freshmen. "That's a bond I will only ever have with your class."