Royce Foltz II must spend three days on house arrest on his DUI case, which is the case in which he submitted falsified court forms. 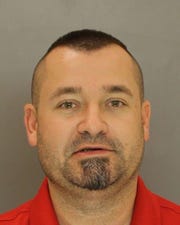 A former Hanover constable accused in 2016 of fudging official state forms related to his job has avoided prison for submitting falsified court forms in his 2017 DUI case.

Royce Kent Foltz II appeared in York County Court on Monday, where Common Pleas Judge Michael E. Bortner sentenced him to a year of probation, according to court records.

Foltz, 39, pleaded guilty Nov. 18 to the second-degree misdemeanor of unsworn falsifications to authorities involving forged or altered documents, according to court records. It was a negotiated guilty plea that called for him to serve probation only.

He submitted falsified forms in his drunken driving case that indicated he had performed community service when he had not, officials said.

Also on Monday, Foltz was sentenced to a concurrent six months' probation after having been found guilty Jan. 30 of driving under the influence.

In the DUI case, Foltz must also spend three days on house arrest, wearing an alcohol-monitoring device for 10 days, take DUI classes and complete drug and alcohol counseling, according to court records.

Foltz, of the 600 block of High Street in Hanover, submitted the forms to show he had performed community service, which was required for him to successfully complete the Accelerated Rehabilitative Disposition program. The program allows first-time nonviolent offenders to avoid possible conviction by instead completing court-ordered requirements.

He was accepted into ARD in June 2018 for his DUI case, court records state. His requirements included completing 40 hours of community service within four months of his ARD acceptance, documents state.

On Dec. 21, 2018, and Jan. 16, 2019, Foltz emailed community-service reporting forms to the DA's office that indicated he had volunteered with both groups, charging documents allege.

But an administrator at SAVES told investigators Foltz wasn't present for any of the incidents or events that Foltz noted on his form, documents state.

A supervisor for the Florida contingent of Oath Keepers said he doesn't know Foltz and that Foltz wasn't involved in any of the group's volunteer efforts in the wake of Hurricane Michael, a Category 5 hurricane that hit Florida in October 2018.

The form sent to the DA's office by Foltz indicated he volunteered in Florida after that hurricane.

Oath Keepers is one of the largest anti-government groups in the United States, according to the Southern Poverty Law Center, and claims to have tens of thousands of current and former law-enforcement officials and military veterans as members.

Foltz was removed from the ARD program on Sept. 5, court records state, meaning he once again had to stand trial in his DUI case, for which he was found guilty Jan. 30.

Hit a building: Foltz was driving his Toyota Tacoma in Hanover about 1:30 a.m. Feb. 12, 2017, when he crashed into the storefront of 455 Carlisle St., wedging his vehicle between a pole and the building, according to Hanover Police.

When officers got there, Foltz was standing outside the Toyota and a woman was in the driver's seat, police said.

Foltz initially denied being the driver but later admitted to driving after drinking "at multiple local establishments throughout the course of the evening," court documents state.

His blood-alcohol level was later determined to be 0.2%, or more than twice the state's legal limit of 0.08%, according to documents.

Police said he was swaying back and forth at the scene, slurring his words and smelling strongly of alcohol.

Foltz submitted paperwork to York County on behalf of Harris and signed Harris' name on that paperwork, according to court records at the time. The paperwork was seeking payment for warrants and subpoenas allegedly served by Harris, documents state.

Foltz's defense attorney, John Mooney, previously told The York Dispatch that Foltz, who was elected in January 2016, was still learning how to be a constable when the charges were filed.

"Unfortunately, Mr. Foltz is being prosecuted for trying to learn a job that has no known notebook of procedures ... or any administrative orders for constable protocol," Mooney said in December 2016.

The DA's office later dropped the charges against Foltz and Harris, who were suspended from constable duties in August 2016 after the allegations surfaced.