"He did not want to risk losing the bear hide or skull," Game Warden Scott Brookens testified. "This is a once-in-a-lifetime bear." 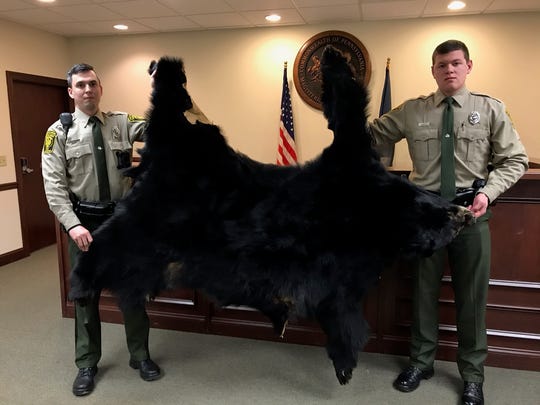 A Newberry Township man found guilty Thursday of poaching the largest black bear ever seen in York County — alive or dead — took no responsibility for his actions and has no remorse, Pennsylvania Game Commission officials said.

The bear weighed 480 pounds after being field dressed, according to testimony.

Game Warden Scott Brookens, who filed poaching and related summary citations against Gregory Jay Myers, said the bear weighed an estimated 560 pounds when it was alive.

Myers' victims in the case are the hunters who knew there was a trophy black bear in the area of Pinetown Road in Fairview Township back in 2018 but who were denied the chance to legally harvest it, said Richard Danley Jr., the Game Commission's law-enforcement supervisor for the south-central region.

Myers, 67, of the 100 block of Miller Road, was found guilty of the offense of illegally taking game and was ordered to pay a $1,200 fine plus about $117 in court costs. He was found not guilty of obstructing the warden's investigation.

Presiding District Judge Richard Thomas declined to impose the $5,000 replacement fee requested by the Game Commission. He sat in for Fairview Township-area District Judge Scott Gross, who recused himself.

Myers used a crossbow to kill the bear while hunting with permission on a farm property along Pinetown Road on Nov. 12, 2018, which was two days after bear season ended for archers that year, according to Brookens.

Testimony: Brookens testified at the Thursday, Feb. 6, summary hearing that Myers admitted to taking the shot from about 15 yards away, then calling his friends to help him drag the carcass to his vehicle. 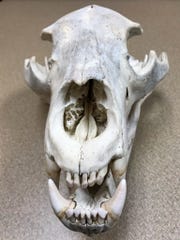 Myers' brother told Myers over the phone that bear season was over while Myers was still in the woods with the dead bear, according to Brookens, although Myers claims he didn't know the bear was out of season until it was hanging in his shed.

Myers admitted he didn't report the mistaken kill to the Game Commission, although there is a program to do that.

"He did not want to risk losing the bear hide or skull," Brookens testified. "This is a once-in-a-lifetime bear. ... It's the biggest bear we've ever seen in York County."

Myers took active steps to cover up his crime so he wouldn't lose his trophy bear and have to pay fines, Brookens argued. The Game Commission will also likely suspend his hunting privileges.

At one point in the hearing, Myers said he was unaware a bear was in the area, then later, under cross-examination, said he was aware of that.

'Planets aligned': Myers testified that when he saw the bear, "all the planets were aligned." He was able to shoot his crossbow bolt into the animal behind the bear's second rib on the right side, killing it in about two seconds, he estimated.

He said after realizing he'd illegally killed the bear, "I determined there was no benefit" to him in notifying the Game Commission. Testimony indicated he was keen to keep the trophy hide and skull.

He said he gave away about 180 pounds of bear meat to his friends and told the district judge that he didn't do that to conceal the meat from investigators, as Brookens alleges. 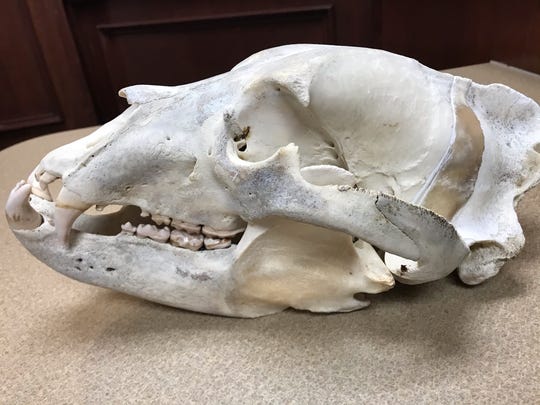 Gregory Myers of Newberry Township was found guilty of poaching what the PA Game Commission said is the largest black bear they've ever seen in York County, alive or dead. This is the bear's skull. (Photo: Liz Evans Scolforo photo)

Myers didn't turn over the hide or skull to the Game Commission, testimony revealed. The first chance wardens had to even see that evidence was at Thursday's hearing.

Myers brought them to the hearing and tried to take them with him afterward, but Brookens and fellow Warden Cameron Murphy seized the items and wrote Myers receipts for them.

Brookens told the judge that Myers was "basically trying to trip up the investigation as much as he could."

Both the hide and skull will stay in York County and be used for educational purposes, wardens said.

Blamed Game Commission: Myers represented himself at the hearing and blamed the Game Commission and what he claimed were its "series of administrative mistakes" for the poaching incident.

He subpoenaed the game agency's Commissioner Brian Hoover and another official, but neither showed up. Jason Raup, assistant counsel for the Game Commission, said that's because the subpoenas weren't properly served and therefore didn't have to be followed.

The subpoena issue was moot, Judge Thomas said, because Myers' line of questioning for those officials was irrelevant and he wouldn't have allowed it anyway.

"I prepared eight pages of questions for (Hoover)," Myers protested.

He also argued his due process was violated and started to explain to the judge what due process is. Thomas stopped him and said he was familiar.

Myers also wanted to know how the state could seize "my property," meaning the bear hide and skull, because that violates his constitutional rights, he claimed.

Brookens explained, "I not only told you it was contraband, I also told you it was evidence." Contraband and evidence can be legally seized without violating a citizen's rights, he said.

No indictment: Myers' plan to turn his hearing into an indictment of the Game Commission failed, and the judge, in telling Myers he has 30 days to appeal, suggested the man get an attorney.

Thomas said York County common pleas judges wouldn't allow Myers to go off on irrelevant tangents, as Thomas gave him some leeway to do.

During the hearing, Myers refused to give the name of the taxidermist who illegally prepared the bear hide.

Anyone with information is asked to contact the commission's Operation Game Thief at 888-PGC-8001. Online, go to pgc.pa.gov and click on "report a violation" at the top of the page.