The stabbing victim said he was stabbed for having sex with too many of Jamal Anderson's "women," police allege. 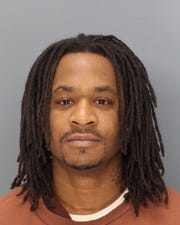 Police are searching for a Red Lion man accused of stabbing someone in the thigh in the parking lot of a Manchester Township motel.

Jamal Sharif Anderson, 44, of the first block of East High Street, is wanted on a felony charge of aggravated assault, as well as for the misdemeanors of simple assault, making terroristic threats and reckless endangerment.

Officer Anthony Gelbaugh was dispatched to the rear lot of the Super 8 Motel on Arsenal Road about 6 a.m. Friday for a stabbing and found victim Corey Price lying on the ground in the 100 block of East 11th Avenue and bleeding profusely from his right thigh, charging documents state.

Gelbaugh applied a tourniquet to Price's leg to stanch the bleeding, police said.

Price, 28, told officers that Anderson was upset at him for sleeping with too many of Anderson's women, according to charging documents, which allege Anderson pimps out prostitutes.

The two men argued, and Anderson stabbed Price in the leg, documents state.

Price told officers that after being stabbed, he ran toward 11th Avenue to get away from Anderson, who drove off, according to police.

A witness to the stabbing provided officers with a description of the attacker that resembles Anderson, according to charging documents.

Price was treated at York Hospital for his injury, police said.

Anderson has twice pleaded guilty in Lebanon County Court to dealing drugs, according to court records.

Anyone with information on Anderson's whereabouts, or about the stabbing, is asked to call Northern York County Regional Police at 717-292-3647.

Tipsters can also leave information on the department's tip line, 717-467-TELL, or send information to tips@nycrpd.org.