Tom Kelley was accepted into the Accelerated Rehabilitative Disposition program on Nov. 26, according to York County court records. 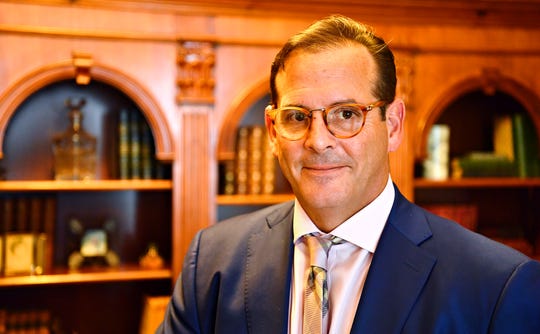 A prominent local attorney and former York County common pleas judge has been accepted into a diversionary program that, if successfully completed, would allow him to avoid possible conviction on his drunken-driving charge.

Thomas H. Kelley, 55, of East Philadelphia Street in York City, was accepted into the Accelerated Rehabilitative Disposition program on Nov. 26, according to York County court records.

Defendants don't have to admit guilt to be part of ARD. The program requires participants to complete court-ordered requirements such as counseling and community service.

In Pennsylvania, a defendant's acceptance into the program is up to the county district attorney, and a common pleas judge must then approve it.

Kelley's ARD requirements include attending a victim-impact panel, performing 35 hours of community service within four months, taking DUI classes and submitting to a drug and alcohol evaluation, according to court records.

At the time charges were filed, Kelley issued a public statement apologizing "to the citizens of York, the police, my clients, the Legal community, and last, but not least, my friends and family."

The statement, in which Kelley wrote that he's deeply regretful, continued:

"My clients often make mistakes for which they can be forgiven. After 30 years in the Legal field I should have learned from theirs — failing to do so is sheer lunacy.

"Real proof of my shame and remorse will be to never let something like this happen again."

The background: York City Police pulled Kelley over about 9 p.m. May 29 in the 200 block of North George Street for driving at an unsafe speed, according to court documents.

An officer heard Kelley's Mercedes-Benz accelerate, then saw it traveling at a high rate of speed, heading west toward the Philadelphia Street intersection, documents state.

The road was wet, police said, and the speed at which Kelley was driving "was greater than reasonable and prudent under these conditions as the area is heavily traveled by pedestrian traffic who cross the street regularly," according to court documents.

After being pulled over, Kelley agreed to perform field sobriety tests after an officer smelled alcohol on his breath, documents state.

Based on those tests, Kelley was arrested and taken to the county's central booking unit, where he submitted to a blood test, police said.

His blood alcohol level was later determined to be 0.228%, charging documents allege. In Pennsylvania, an adult is driving drunk at 0.08%.

In the news: Kelley made news in 2011 when former assistant public defender Janan Tallo, who had dated Kelley, was granted a protection from abuse order against him, alleging he broke her elbow during an argument at his former home in York Township.

The state attorney general's office determined no charges should be filed against Kelley, and he admitted no wrongdoing.

In January 2014, he was cited by York Area Regional Police for hitting a fire hydrant and failing to notify police. He paid a fine and court costs totaling nearly $600.

He prosecuted three murder cases in which the death penalty was handed down — for murderers Kevin Dowling, Milton Montalvo and Noel Montalvo — and also was a lead prosecutor in the prosecutions of 1969 race-riots murderers.

Kelley stepped down as a York County common pleas judge in October 2015, two years into his second 10-year term. He was first elected in 2003.