State prison for Hanover man who stabbed wife and another man

Hanover Police have said Brandon Moorefield was suspicious of his wife and used an app to track her cellphone to another borough home.

State prison for Hanover man who stabbed wife and another man 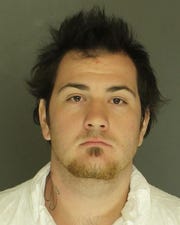 A Hanover man who police said broke into a borough home and stabbed his wife and another man has been sentenced to at least six years in state prison.

Brandon Lee Moorefield, 26, of Third Street, appeared in York County Court on Oct. 30, where he was sentenced to six to 12 years in prison and given 250 days' credit for the time he's already spent locked up, court records state.

On Sept. 5, he had entered an open guilty plea — meaning one with no negotiated sentencing agreement —  to two counts of first-degree felony aggravated assault, according to court records.

In exchange for his plea, charges including attempted homicide, kidnapping, burglary, stalking and unlawful restraint were dismissed, records state.

Moorefield broke into a home in the first block of College Avenue about 4:30 a.m. Feb. 23 after tracking his wife's phone there, Hanover Police have said.

He stabbed his wife, who was 21 at the time, and a 25-year-old man inside the home before forcibly taking his wife with him when he fled, police said at the time.

She was found covered in blood in the 300 block of North Forney Avenue after neighbors there called to alert officers to a possible domestic dispute on the street, police have said. Moorefield was with her when officers arrived.

The other man was stabbed seven times and suffered serious injuries, according to police, who said the woman's injuries were not life-threatening. Court documents did not name the victims.

Moorefield's wife had three stab wounds to her leg, police have said.

He told investigators that his marriage had been strained recently and not knowing where she was made him suspicious, police said.

But he denied injuring her, instead claiming he knocked on the door to the College Avenue home after hearing screaming inside from a woman he believed to be his wife, documents state.

Moorefield denied breaking into the home and said his wife came out on her own, according to police.

His wife told authorities she didn't remember what happened, police have said.

The night before the double stabbing, Hanover Police had been in contact with Moorefield's wife, who was concerned about her safety from her husband, court documents state.

Police said there were documented incidents of prior violence between Moorefield and his wife.