Bill Hynes made news this summer after York County's sheriff allowed him to park in the secure garage under the county Judicial Center to attend a PFA hearing. 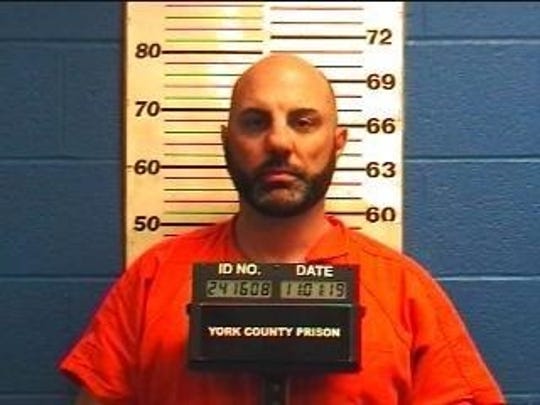 Bill Hynes, the CEO of York City companies Think Loud Development LLC and United Fiber & Data, has resigned as CEO of UFD, according to a company statement.

UFD's board of directors has accepted the resignation and supports Hynes' decision to step down, according to the statement released by Paxton. It appears Hynes remains CEO of Think Loud. Calls there were not returned Monday.

Court documents reveal more details about the stalking, burglary, assault and fraud allegations made by state police against Hynes.

Hynes is a felon who made news this summer when York County Sheriff Rich Keuerleber allowed him to park in the secure garage under the York County Judicial Center to attend a protection from abuse hearing in which Hynes was the defendant.

That's the garage where judges and other elected county officials park, including the judge who presided over Hynes' PFA case.

The 47-year-old Hynes, of the 200 block of York Street, posted $50,000 bail in one case and has $25,000 unsecured bail for his second related case, in which police have charged him with indirect criminal contempt for allegedly violating the terms of the three-year PFA against him.

Hynes was released from prison Monday, Nov. 4, according to prison records. He had been in York County Prison since Friday, Nov. 1, because he had to meet with a probation officer before being released, York County spokesman Mark Walters said.

Special treatment? Keuerleber previously said that Hynes — who through Think Loud donated the money for the sheriff's office to buy K-9 Dargo — received no special treatment.

The listed victim in the PFA case is Hynes' ex-girlfriend, who also is his former employee.

Defense attorney Chris Ferro, who represents Hynes, has said he cannot yet discuss the criminal allegations against his client because he hasn't had an opportunity to review charging documents.

According to those documents, state police investigators began looking into Hynes in July, after speaking with the woman about allegations she had made in her petition for a PFA against Hynes.

The woman told police she began working at United Fiber & Data, 210 York St., in August 2014 and that she and Hynes became intimately involved around November 2014, documents state.

In June 2017, the woman bought a house in Spring Garden Township for $205,000 and was given a $55,000 gift from Hynes — through a third company Hynes is involved with at 210 York St., Think Loud Investments LLC — for a down payment and closing costs, according to state police.

Fraud allegations: Charging documents indicate the money was documented as a gift that did not need to be repaid and that Hynes and the woman signed a note stating as much.

"The letter states that the company has previously done this for other employees," documents state.

But in May 2019, when the woman tried to rent out the house, she received a notice from Hynes that in June 2017 he had taken a second mortgage on the house for $60,000, according to police.

His secretary told investigators she didn't think the woman's "signature" on the second-mortgage document was made by her and that the secretary's notary log — which state law requires her to keep — had no entry for the document in question, police allege. The secretary said she's meticulous about recording all notary transactions and doesn't believe she's missed an entry.

She told police she keeps her notary seal in a desk drawer that she locks at night but keeps unlocked during the day, according to police.

The secretary said that on July 29, Hynes told her she needed to testify at his PFA hearing that she notarized the second-mortgage document, police allege.

Stalking charge: Court documents allege Hynes illegally attached a tracking device to the car of his ex-girlfriend/ex-employee, which was found Jan. 28 of this year by service technicians doing work on her car.

The woman told investigators she broke up with Hynes and told him she was resigning in June 2018, documents state.

Using the serial number of the BrickHouse 4G GPS TrackPort, which was turned over to police by the woman's PFA attorney, investigators tracked the device to Hynes and learned it recorded tracking data for the vehicle's movements from April 26, 2018, to Jan. 29 of this year, charging documents allege.

There was a monthly plan associated with the tracker, according to documents.

Assault allegation: Charging documents also allege that when the woman told Hynes in June 2018 that she was breaking up with him and quitting her job, they were in her home and that Hynes took her cellphone and threw it, kicked a Styrofoam cooler, then picked up an unidentified object and threw it at the woman.

The woman ran downstairs toward her front door, yelling for Hynes to get out, police said.

"Hynes ran after her and caught up with her at the entry way to the residence," documents allege. "He grabbed the back of her neck and pushed her face first into a wall  multiple times. She was then able to open the door and pushed him out of the residence."

About midnight July 5, 2018, the woman was awakened by the Nest security app on her cellphone, and a Nest camera showed Hynes walking upstairs, police said, adding he began yelling for the woman.

More: Sheriff: K-9 sponsor wasn't tipped off about his PFA

Camera deactivated? "As he was walking up the stairs, the camera went blank," documents state. "Hynes (later) admitted to her that the camera stopped working because he had a device called a 'scrammer' that would have disconnected her wifi."

The woman told investigators that by that time, they were broken up, he shouldn't have had a key to her home and that he wasn't authorized to be there, police said. She also said she locked her doors before going to bed.

"She stayed quiet at first, but when he got to her bedroom door, she told him to go away and that he was scaring her," charging documents state. "The (bedroom) door was locked. She retreated to her bedroom en suite ... (where) she heard him force his way into the bedroom."

She then yelled that she'd called police, which wasn't true, but which caused Hynes to curse at her and leave the home, police allege.

'I need to be humbled': The woman's mother later told police that while she was having work done at her daughter's home, Hynes came over and fixed the damaged bedroom door, police said.

Records from the mother's cellphone show Hynes agreeing to fix the roughly $300 in damage and saying, "It would be therapeutic for me. I need to be humbled," according to charging documents.

One of the woman's neighbors told police she remembers a man's angry, yelling voice coming from the home and believes that was on the same date as the alleged burglary, documents state.

Cyber harassment? The three-year PFA against Hynes, granted on July 29, forbids him from having any contact with his ex and also forbids him from making remarks about her on social media, police said.

Police allege someone on Facebook using the name "Jon Hoch" posted comments about the woman under a link to a news article about the PFA.

"The comment related personal details about the (woman) and her family," charging documents allege.

Investigators found a number of posts and comments on Facebook from the "Jon Hoch" profile, which used a photo of a Colorado man whose name isn't Jon Hoch, according to police.

Police learned the comments made by the "Jon Hoch" profile came from a Think Loud computer IP address, documents state, and that the account had searched for the woman's name more than a hundred times between January and August of this year, documents state. The profile also searched "numerous times" for people associated with her, police said.

The charges: Hynes was arraigned Friday on felony charges of burglary, criminal trespass, theft by deception, forgery and tampering with public records.

He also is charged with the misdemeanors of stalking, simple assault, harassment and record-tampering, plus the summary offenses of harassment and criminal mischief. Pennsylvania's crime code can have different gradings for the same criminal charge, depending on the circumstances of the alleged crime.

Hynes is a felon, having been found guilty of the third-degree felony of theft by deception in Northampton County on Sept. 15, 2010, according to court records.

Ferro has called the PFA allegations baseless and without "evidentiary support."

'Dereliction of duty': The York County Commissioners on July 23 issued a statement saying Keuerleber was derelict in his duties for allowing Hynes to park in the judicial center's secure underground garage July 15 to attend a PFA hearing.

"The York County Commissioners have completed their investigation regarding a breach of security which occurred at the Judicial Center on Monday, July 15, 2019. The Commissioners have concluded, as a result of their investigation that there was a dereliction of duty by the Sheriff which resulted in a security breach. The breach allowed a defendant with an active Ex Parte Protection from Abuse Order against him to park in a secure area. By admission of the Sheriff, the formal security protocols were not followed."