A York City man accused in a Springettsbury Township assault has been indicted on federal drug and firearms charges, according to authorities. 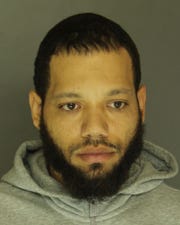 A York City man accused in a Springettsbury Township assault has been indicted on federal drug and firearms charges, according to authorities.

The indictment alleges that Tyler had cocaine, heroin and a gun he was not legally allowed to own when he was arrested on Jan. 22.

York City Police, who arrested Tyler alongside the U.S. Marshals Fugitive Task Force as part of the York County Drug Task Force, filed charges against Tyler alleging he had drugs and a handgun when he was arrested in Spring Garden Township that morning.

Tyler, who has multiple felony convictions, is not allowed to have a gun, officials said.

He was charged locally with drug possession with intent to deliver and prohibited possession of a firearm.

He remained charged in an alleged incident in Springettsbury Township in January 2018.

In that case, he was charged with two counts of aggravated assault and one count each of simple assault, reckless endangerment and harassment.

Tyler and three other men assaulted a man outside the Banana Max bar at 2650 Eastern Blvd. about 2 a.m. Jan. 26, 2018, according to authorities.

A message left for the attorney representing him in his York County cases was not immediately returned. He does not have an attorney listed for his federal case.

The federal case was brought in as a partnership between the U.S. Attorney's Office and York City to reduce violent crime.