Police said the 67-year-old victim was bleeding from his face and the back of his head from Tuesday's attack and robbery. 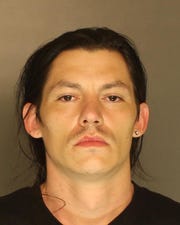 A Dover-area couple and a York City woman are now in York County Prison, accused of beating and robbing a man outside a West Manchester Township supermarket on Tuesday night.

Police said they arrested the trio as they were fleeing the area. Officers later found three glass pipes in the robbers' vehicle, they said; such pipes are often used for smoking crack cocaine.

The victim, 67-year-old Edward Bowman, had blood all over his face and head when officers arrived, police said.

He suffered cuts under each eye and to the back of his head and was taken to Memorial Hospital, according to West Manchester Township Police.

More: Whether regional or local, policing is growing more expensive

Locked up in lieu of bail are Jakob Ray Stedham, 30, and Kendra Nicole Stedham, 25, both of the 2100 block of Huntington Road in Dover Township, and Sanika Sacole Dickson, 34, of the 500 block of West Philadelphia Street.

They are charged with robbery, conspiracy to commit robbery, simple assault and theft. The women also are facing drug- and paraphernalia-related charges.

The trio of alleged robbers pulled into the parking lot of Giant Food Store in the 1200 block of Carlisle Road about 7:30 p.m. Tuesday, Oct. 23, and repeatedly got in and out of the white Toyota Sequoia they arrived in, according to charging documents.

Asked for gas money: Bowman pulled into the lot about 8 p.m. and was approached by Kendra Stedham, who claimed she ran out of gas and asked him for money, documents state. 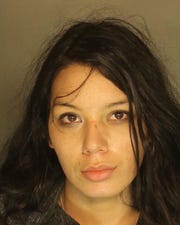 Bowman initially declined to give her money but said he would drive her home if she waited until he ran into Giant and bought a few items, documents indicate.

About 10 minutes later, Bowman returned to his vehicle with the items he bought at the store and gave Kendra Stedham $20 for gas, police said.

She responded by getting into Bowman's vehicle and asking him for more money, claiming her car was a "gas hog," charging documents state.

That's when Jakob Stedham got into the back seat of Bowman's vehicle, grabbed Bowman from behind and started punching and assaulting him, according to charging documents.

Bowman yelled for help to people nearby and was able to partially open his door, at which point Dickson appeared, police said.

"He thought (she) was there to help him, but she began to assault him and take his wallet," documents state, while the Stedhams — both in the back seat — instructed Dickson to do so. 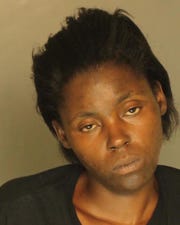 Bloody hands: A number of people witnessed the attack and robbery and called police, who pulled over the alleged robbers' SUV at the intersection of Carlisle Road and White Street and arrested them, police said.

Jakob Stedham had blood on his hands and marks on his knuckles, and Kendra Stedham had a small cut on a right-hand knuckle, according to police.

Bowman's stolen property was found in the trio's SUV, including cash, credit cards, identification cards and his wallet, police said.