Tobias Bethune-Banks is charged with the homicide of Danny Steele in York City in December 2013. 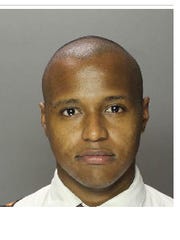 The defense attorney for a man accused of a 2013 slaying in York City said Tuesday the prosecution's case hinged on a "rat" who fabricated a story to get himself out of trouble.

Jack McMahon, attorney for Tobias Bethune-Banks, said Carl Hodge informed police that Bethune-Banks had admitted to him that he murdered Danny Steele in December 2013.

"He is there for Carl and Carl only," McMahon said during his opening statement.

Authorities have said Bethune-Banks, 23, killed Steele, 36, in York City on Dec. 7, 2013. Bethune-Banks is charged with first- and third-degree murder.

Steele had testified against Bethune-Banks' father in a 1997 murder trial.

"Within a week ... they get an arrest warrant," McMahon said.

But first assistant district attorney Tim Barker urged jurors to listen to the facts presented in the trial.

"Danny Steele is the reason why (Bethune-Banks') father is doing life in prison," he told them.

York City Police said Bethune-Banks was trying to get Steele to recant his testimony at the request of his father, Melvin "Fatback" Bethune.

Steele testified against his two childhood friends — Bethune and Tysheem "Ty Boogie" Crocker — at the men's murder trial for the 1997 gang-war slaying of Raymond "Skip" Clarke.

Bethune and Crocker, both 42, were convicted of first-degree murder and are serving life sentences for Clarke's death.

Steele was sentenced to 2½ to five years in prison after pleading guilty to conspiracy to commit first-degree murder.

When Steele refused to recant his testimony, Bethune-Banks "aired him out," according to police. Steele was gunned down in his car on Dec. 7, 2013, at the corner of North George and North streets.

Barker told jurors that Steele and Bethune-Banks were at The Belmont, a club in North York, and that Bethune-Banks followed Steele from it and gunned him down.

Surveillance footage showed Steele being followed by another car while traveling south on North George Street about 2:50 a.m. that day, according to Barker.

Steele's vehicle was shot multiple times for one reason, according to Barker.

"It's because you want him dead," he said.

But McMahon took exception with the allegations. Bethune-Banks had not talked to his father in more than three years, and he did not know who Steele was, he said.

Bethune-Banks had tried to talk Steele into recanting his testimony while at The Belmont, according to authorities.

"(Bethune-Banks) did not know he was at the bar because he didn't even know who he was," McMahon said.

McMahon told jurors that lead investigator York City Detective Paul DeHart III had three other suspects in mind for the slaying but was not able to prove it was them.

It wasn't until 2017, when Hodge spoke to them, that charges were filed, according to McMahon.

"He didn't go there with a gun; he went there to watch a rapper," McMahon said of his client.

McMahon claimed Hodge, a relative of Steele, told authorities things that didn't add up. For instance, Hodge told police that Bethune-Banks admitted there was a shootout with Steele, but evidence showed that wasn't the case, according to McMahon.

"You'll hear that there was only one gun fired," he said.

Being a relative of Steele, Hodge knew that cooperating with authorities could help him out, McMahon said.

He alleged most of the information provided from Hodge was either from his family or newspaper reports.

"This case will show you all that all of us are one false allegation from disaster," McMahon said.

The trial is expected to resume Wednesday.