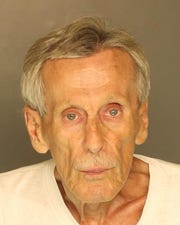 A Florida man faces multiple felony charges, including attempted homicide, after police said he shot at a man in West Manheim Township recently.

Laughman was a disgruntled family member of Sanders, according to police, who said the two were involved in a dispute regarding a dead relative's will.

Laughman, of Zephyrhills, Florida, is charged with attempted homicide, aggravated assault, prohibited possession of a firearm and two misdemeanor charges of recklessly endangering another person.

That vehicle was struck twice by bullets, charging documents state. Laughman then fled the scene, according to police.

Sanders and a woman, Jennifer Sanders, were in the area where Laughman was shooting, which is why he faces two charges of reckless endangerment, according to court documents.

Police searched Laughman's criminal history and found that he is a felon and not legally allowed to have a firearm, charging documents state.

Laughman was arraigned on the charges the morning of Thursday, June 25. He was sent to York County Prison on $250,000 bail.

Editor's note: An earlier version had the incorrect date the incident allegedly occurred. This story has been updated.