A Lancaster County trio, including one teenager, are accused of robbing three people at gunpoint in Wrightsville last month, according to police.

A Lancaster County trio, including one juvenile, is accused of robbing three people at gunpoint in Wrightsville last month, according to police.

Police said the three pulled up in a sedan  and approached three teens.

Kenion went up to one teen, reached into the teen's pockets and pulled out his phone, court documents allege. He then told the teen to take his shoes off, to which the teen said no, police said.

Derr then pulled out a pistol and pointed it at the teen, and that teen gave Derr his shoes, according to charging documents.

One of the other teens was asked what his shoe size was, but he told the three that they weren’t getting his shoes, police said.

One of the three alleged robbers grabbed that teen by the hoodie, prompting the third teen to threaten to call police, charging documents state.

The three got in their car and left toward Columbia, officials said. 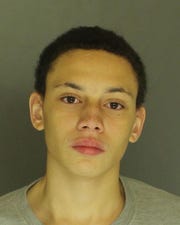 Derr, of the 200 block of Locust Street in Columbia, faces the same charges.

Kenion, also of the 200 block of Locust Street, is charged as an adult with robbery, conspiracy to commit that offense and misdemeanors of theft and receiving stolen property.

Deitz, who was arraigned on the charges Tuesday, June 4, remains free on $50,000 unsecured bail. Kenion was sent to York County Prison on $50,000 bail.

The charges were filed  May 31.

Kenion was taken into custody May 17 by Columbia Police in an unrelated incident. Police said he was found with the stolen shoes.

Derr was arrested by Columbia Police on May 21. He allegedly robbed a woman at gunpoint in the borough on May 19.

Online court documents state Derr is currently in Lancaster County Prison on $100,000 bail. He is charged with robbery.

A number could not be found for Deitz, and he does not have an attorney listed.