A York Township man told police he "snapped" when he stabbed his wife and mother-in-law over the weekend, according to authorities. 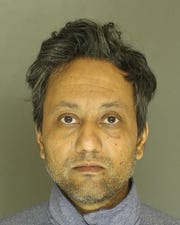 A York Township man involved in a fatal crash on Interstate 83 last month told police he "snapped" when he stabbed his wife and mother-in-law over the weekend, according to authorities.

On Monday, Dev, of the 2700 block of Woodspring Drive, remained in York County Prison without bail, charged with attempted homicide and two counts each of aggravated assault and simple assault.

On May 24, Dev, driving a Toyota Rav4 with his wife as a passenger, struck a blue GMC Sierra near the Shrewsbury exit on Interstate 83, state police have said.

Namitha Alicea, 41, was ejected from the back seat of the Sierra and died at the scene.

State police are investigating the crash, and no charges have been filed.

York Area Regional Police Chief Tim Damon said he was aware of Dev's involvement in the crash, but he didn't know if investigators were probing any connection between the incidents.

Alleged stabbing: Charging documents state Dev was watching a movie with his wife, mother-in-law, two daughters and one of their friends when the attack happened Saturday night.

He began stabbing his wife, Medura Dev, in the head, and her mother, Suhama Kanikar, tried to protect her, according to police allegations.

He then started stabbing Kanikar, and she and her daughter were eventually able to get the knife away from him and leave the house, police said.

Both were taken to York Hospital for treatment.

Police spoke to Nikhil Dev, who told them he began having chest discomfort during the movie and thought he was "losing it," charging documents state. He got up, paced around, then went into the kitchen and grabbed a knife, according to police.

He admitted to stabbing his wife and mother-in-law before they were able to take the knife away from him, court documents state.

Nikhil Dev said something "snapped" inside of him and that he was debating whether to stab his wife while he was pacing, police said. 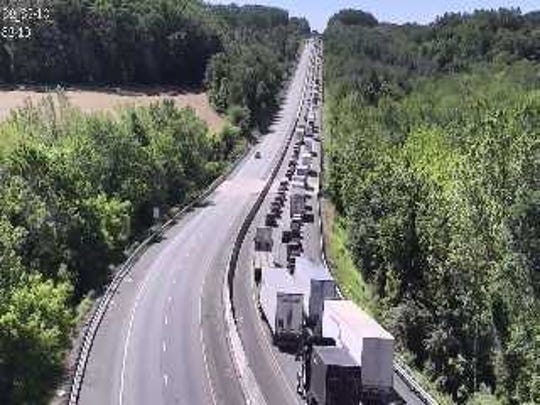 Traffic was backed up for miles after crews closed a portion of Interstate 83 near Shrewsbury Friday, May 24. Photo courtesy of 511pa.com. (Photo: Submitted)

Fatal crash: In the earlier incident, Nikhil Dev struck the GMC Sierra on the rear driver's side just before 9 a.m. May 24, state police said in a news release. The two vehicles hit the I-83 median, according to police.

Alesander Alicea, the Sierra's driver, was taken to York Hospital from the scene.

Nikhil Dev and Madura Dev, who was a passenger in his vehicle, were taken to York Hospital from the scene.

Nikhil Dev does not have an attorney listed. His preliminary hearing is scheduled for June 14 at District Judge Scott Laird's office.