A Newberry Township man is accused of blindfolding a girl before sexually assaulting her earlier this year, according to police. 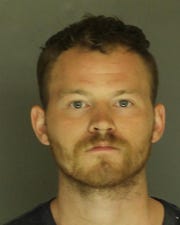 A Newberry Township man is accused of blindfolding a 4-year-old girl before sexually assaulting her earlier this year, according to police.

Paul Michael Pietrusza, 25, allegedly put his penis in the girl's mouth while she was at his Old Trail Road home on Jan. 15, according to court documents.

Pietrusza is charged with involuntary deviate sexual intercourse with a child and a misdemeanor charge of indecent assault of someone younger than 13.

Court documents state the girl could see what Pietrusza was doing from below the blindfold.

Interview: In March, investigators asked Pietrusza about the incident, and he said she asked for candy, so he covered her eyes so she couldn't see the adult toy in a drawer where he kept the candy, according to police.

When asked how he thought the victim felt about the incident, Pietrusza said she was "upset, terrified, completely and utterly alone," court documents allege.

He was asked why he thought that, and Pietrusza said "because someone she trusted did something like this," according to police.

Pietrusza was arraigned at the county's central booking unit Wednesday, May 8. He is currently free on $25,000 bail.

Charging documents state Pietrusza spoke to police with his attorney; however, his attorney is not yet listed.

His preliminary hearing is scheduled for May 22 at District Judge Scott Gross' office.