Two men are accused of repeatedly punching a man in they face while he was held down and choked in Newberry Township early Sunday morning, according to police. 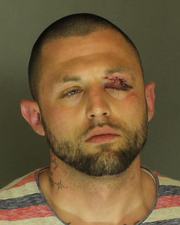 Two men are accused of repeatedly punching a man in the face while he was held down and choked in Newberry Township, according to police.

The victim, who was watching a child, was laying on the couch in the living room when they assaulted him, according to court documents.

Police said Antonetti choked the man while Fickes punched him repeatably in the face.

The two left the scene in their car after the victim broke free, court documents allege.

The victim then followed them until Fickes' vehicle struck a Met-Ed pole in the 5900 block of Susquehanna Trail, according to police. 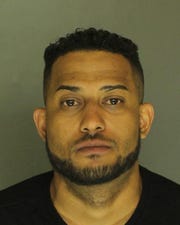 Fickes, who was driving, had a strong odor of alcohol coming from him, court documents state.

Fickes, 30, of the first block of Sunset Drive in East Manchester Township, remains in York County Prison on $50,000 bail, charged with aggravated assault and misdemeanor charges of strangulation, simple assault, recklessly endangering another person and DUI.

Antonetti, 32, of the 100 block of Third Street, Columbia, remains free after posting $25,000 bail. He is charged with aggravated assault and misdemeanor charges of simple assault, strangulation and recklessly endangering another person.

A phone number could not be found for him, and he does not have an attorney listed.