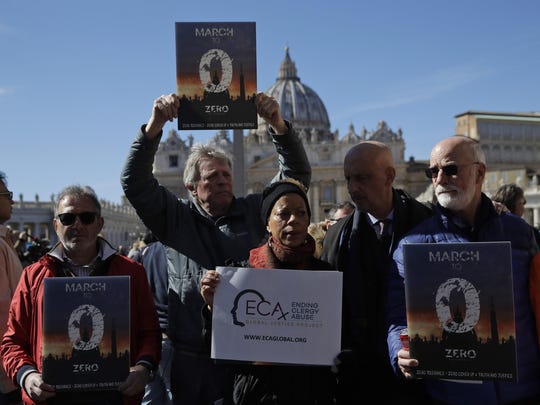 Sex-abuse survivors and members of ECA (Ending Clergy Abuse), hold signs Sunday in front of St. Peter’s Square at the Vatican. The pope vowed to end cover-ups by Catholic Church officials and to make victims a priority, but some survivors were disappointed that no firm action plan was presented during the first-ever global summit. (Photo: Alessandra Tarantino / The Associated Press)

A 75-year-old defrocked Catholic priest who lives in West Manchester Township is now facing trial for allegedly sexually assaulting two altar boys when he served at a Harrisburg church.

John G. Allen, of the 1600 block of Kenneth Road, had his preliminary hearing at the office of Harrisburg-area District Judge Joseph Lindsey on Wednesday, April 24, according to court records.

At the close of the hearing, Lindsey determined enough evidence exists for Allen to stand trial in Dauphin County Court, court records state. The district judge then set formal court arraignment for June 7.

Allen remains free on $25,000 unsecured bail, meaning he didn't have to post any cash to remain free but could forfeit that amount if he misses court proceedings.

Allen is charged with four counts of indecent assault and two counts of corruption of minors, all misdemeanors.

The allegations: Allen allegedly molested the altar boys from 1997 to 2002 while he served as a priest at St. Margaret Mary's Alacoque Church on Herr Street, charging documents state.

In October, alleged Victim 1 reported to police that Allen would come up behind him, grab his buttocks and look down on him, documents allege.

"These occurred inside the church. ... The defendant did this to him over 10 times," documents state. "The defendant assaulted him from (the time) he was 10 years old to 13 years old."

The assaults stopped in 2002 when Allen was removed from the parish by the Harrisburg Catholic Diocese, according to charging documents, which state he was later defrocked by the Catholic Church.

On March 2, alleged Victim 2 told Dauphin County detectives that Allen "repeatedly grabbed his buttocks on different occasions" inside the church when the boy was serving as an altar boy, documents allege.

2 years of assaults? He also told detectives that he was 12 years old when Allen first indecently assaulted him and that the assaults continued until he was 14 years old, which was in 1999, documents state.

Allen also allegedly touched the boy's genitals when the boy was 12, according to detectives.

County detectives began investigating after speaking with alleged Victim 1, according to the DA's news release.

"Allen's name appeared on the Harrisburg Diocese list of priests accused of past molestations and was named as an abuser in the (Pennsylvania) Attorney General's grand jury report," the news release states. "In February 2002, Allen was removed as pastor of St. Margaret Mary's Church after a man reported to the Diocese that Allen had abused him as a boy."

Defrocked in 2006: At the request of the Harrisburg Diocese, the Catholic Church removed Allen from the priesthood in February 2006, according to the news release.

Sean McCormack, chief deputy district attorney in Dauphin County, noted in the news release that there is "a lot of confusion" about the statute of limitations for sexual abuse crimes.

He urged victims of abuse to contact police, even if they think too much time has passed.

Sometimes, abuse cases that are more than two decades old can still be prosecuted, according to McCormack.

According to the Diocese of Harrisburg's online list of accused priests, Allen served at churches in the Gettysburg, Harrisburg, Lancaster, New Cumberland, Steelton, Lebanon and Selinsgrove areas between 1970 and 2002.

Diocese statement: The Diocese of Harrisburg released a written statement in March after Allen's arrest. It states, in part:

"The Diocese of Harrisburg removed John Allen from ministry 17 years ago immediately upon receiving a credible allegation of child sexual abuse against him. That allegation was also turned over to law enforcement and publicly announced by the Diocese at that time.

"Every allegation of child sexual abuse concerning Allen has been reported by the Diocese to multiple law enforcement authorities. Allen’s name was released by the Diocese of Harrisburg in our list of clergy, deacons and seminarians with allegations of child sexual abuse on August 1, 2018, and he was included in the Pennsylvania Grand Jury Report."

The release expressed "heartfelt sorrow and apologies to all survivors of clergy sexual abuse."