'Son of God' charged in crash outside West Manheim Elementary

A Penn Township man who claimed to be the "son of God" crashed his car near West Manheim Elementary School Wednesday, March 28, according to police.

'Son of God' charged in crash outside West Manheim Elementary

A Penn Township man claiming to be the "son of God" is accused of causing a crash near  West Manheim Elementary School on Wednesday morning, according to police.

West Manheim Township Police said Donald Dustin Waltman, 29, made the claim before charging at an officer and a bystander after the crash the morning of March 27.

Police said they believe he was on drugs during the alleged incident.

Waltman, according to charging documents, also threatened to kill the officer.

The officer was treated for his injuries at Hanover Hospital and was later released.

He also is charged with five counts of recklessly endangering another person, three counts of causing an accident to another vehicle and one count each of making terroristic threats and resisting arrest; all of those charges are misdemeanors.

More: No students involved in crash outside West Manheim Elementary

The vehicle was then spotted speeding on East Chestnut Street, and a Hanover Police officer attempted to pull it over, but the vehicle continued, running  a red light at the intersection of Carlisle Street and Broadway, according to court documents.

Hanover Police stopped following him, but not long after, that the vehicle was seen going through a red light at the intersection of Baltimore Street and Grandview Road, where it struck a vehicle, police said.

The vehicle failed to stop at the crash and continued south on Route 94, according to authorities.

It was then spotted in the 1800 block of Baltimore Pike, again speeding and passing cars, police said. The car struck a vehicle in the turning lane at the intersection  of Baltimore Pike and Fairview Drive. The adult driver of the struck vehicle and a 14-month-old passenger were treated at an area hospital for their injuries, court documents state.

Shortly after that crash, the sedan sideswiped another car in the 1900 block of Baltimore Pike before stopping there, police said. 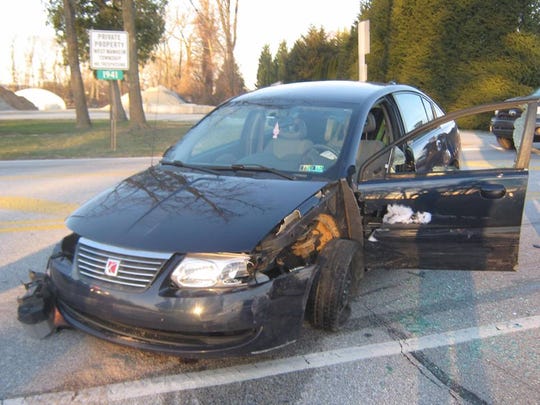 Snyder tazed Waltman, and he yelled "I'm the son of God," and "I'm going to kill you," according to authorities.

Waltman then knocked Snyder and a bystander to the ground, police said.

Additional officers arrived and helped take Waltman into custody, all while Waltman continued to resist them, charging documents state.

South Western School District Superintendent Jay Burkhart told The York Dispatch  last week that the crash delayed a few buses, but no students were involved in the crash.

Additionally, it did not delay the school's opening, he said.

Waltman was arraigned on the charges March 27. He remains in York County Prison on $25,000 bail.

He does not have an attorney listed. His preliminary hearing is scheduled for Wednesday, April 10, at District Judge Jeffrey Sneeringer's office.