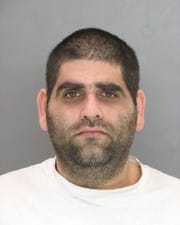 On Wednesday, March 6, jurors found Jacob Hess, 43, guilty on charges of child rape, sexual assault, corruption of minors and  the misdemeanor of indecent assault, according to online court records.

Hess is scheduled to be sentenced on June 25 in front of Common Pleas Judge Gregory M. Snyder.

Hess remains in York County Prison without bail and is awaiting sentencing.

Snyder ordered a sexual-offender assessment be done to see if Hess should be deemed a sexually violent predator, according to court records.

A phone message left for Hess' public defender seeking comment was not immediately returned the morning of Thursday, March 7.

Background: In October 2017, the girl spoke to police and told them Hess raped her multiple times at his old York City home, police said.

In January 2018, Hess told police that he only touched the girl's genitals by accident when they were wrestling. Hess then went on to say how he hated cops and the "system" and how the victim never liked him, police said.

Hess became "physically ill" during that interview but promised to return for follow-up questions. A week later, he admitted to a detective that he raped the girl once, when he was drunk, during a time when he had an ankle monitor, charging documents state.

Hess knew the victim, according to police. He would have been 34 at the time.

He was arrested on the charges in April.