Delvin Rivera, 19, was found sleeping in another man's car, according to police, who said Rivera pointed a gun at the man and fled. 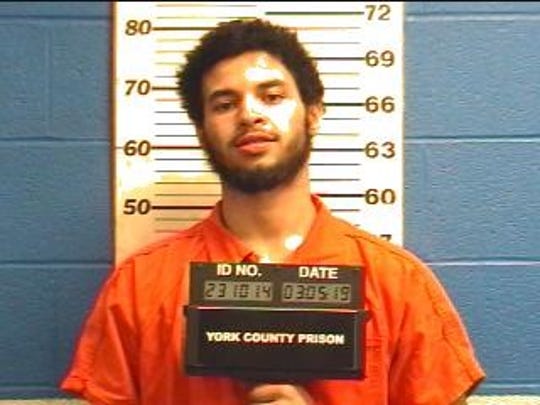 A York City man sleeping in another man's car woke up and pointed a stolen handgun at the  vehicle's owner, according to police.

York City Police said Delvin Hiram Rivera, 19, then fled the car and was arrested shortly after.

Rivera, of the first block of South Queen Street, is charged with aggravated assault, receiving stolen property, prohibited possession of a firearm and carrying a firearm without a license.

Police said the gun he was using had been reported stolen in West York.

Incident: The victim went out to his car in the 200 block of East Market Street about 5:30 a.m. Tuesday, March 5, and found a man, later identified as Rivera, sleeping in it, according to charging documents.

He woke Rivera, who  became hostile and pointed a gun at the man, police said.

Rivera exited the car and fled south toward East King Street, according to authorities.

Officer Galen Detweiler responded to the area and found Rivera near the first block of Susquehanna Avenue, police said. Rivera was ordered to the ground, and Detweiler found the gun in his front right jacket pocket, court documents state.

"I ain't done nothing," Rivera told Detweiler during his arrest, according to police.

Detweiler ran the serial number on the gun and found it had been stolen from a home in West York on Dec. 12, charging documents state.

Rivera was arraigned on the charges March 5. As of Thursday, March 7, he remained in York County Prison on $50,000 bail.

Rivera has an active case on misdemeanor charges of attempted theft from a motor vehicle from Spring Garden Township in January 2018, according to court records.

He does not have an attorney listed. His preliminary hearing is scheduled for March 21 at District Judge Ronald Haskell Jr.'s office.