A Heidelberg Township man who is accused of having sex with a 14-year-old runaway last summer, according to police.

A Heidelberg Township man  is accused of having sex with a 14-year-old runaway last summer, according to police.

Last month Southwestern Regional Police filed charges alleging Adam Ray Dull, 25, had sex with the  girl in his home after he picked her up a few days before.

The two had met on social media, according to authorities.

Dull, of the 5900 block of Colonial Valley Road, is charged with unlawful contact with a minor and statutory sexual assault.

Police said Dull, 24 at the time, had a sexual relationship with the girl between July 4 and July 9. 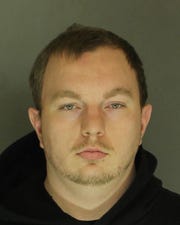 Charges: On July 9, police went to Dull's home and found the teen there, according to authorities.

The girl was reported missing from a neighboring jurisdiction.

Police said Dull told them he had met her online about two weeks before. He picked her up from a local store and brought her to his home, where she stayed for about two days, court documents state.

He admitted to having sex with the girl while she was in his home, officials said.

Dull's tablet and cellphone were searched, and communications records supported the events described by both the victim and Dull, court documents state.

Out on bail: At the time his latest charges were filed, Dull was free on $5,000 unsecured bail from a charge of corruption of a minor from York City in August.

Charging documents state he was found in an abandoned York City home in the 600 block of West King Street in his underwear on Aug. 21.

"Both the juvenile and (Dull) were in their underwear, seemingly living inside the abandoned property," Officer Dakota Fauver wrote in charging documents.

Those documents do not provide an age for the girl allegedly found with Dull.

Dull was arraigned on those charges  Aug. 22. He was in York County Prison on $5,000 bail until Nov. 7, when his bail was changed to unsecured, according to online court records.

Dull was arraigned on his newest charges  Jan. 31. He remains in York County Prison on $20,000 bail.

Dull's case was sent to York County Court of Common Pleas after District Judge Thomas Reilly determined there was enough evidence to proceed during a preliminary hearing Wednesday, Feb. 13, according to court records.

A message left for his public defender was not returned.