A wanted Loganville man considered armed and dangerous was taken into custody Friday, according to officials. 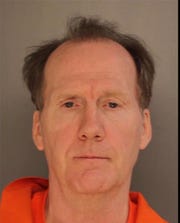 A wanted Loganville man considered armed and dangerous was taken into custody Friday, according to officials.

The York County Sheriff's Office confirmed the morning of Friday, Jan. 11, that John Edward Meyers, 64, had been apprehended and taken to the county's central booking unit.

Renovo Police in Clinton County posted on Facebook on Thursday, Jan. 10, that they were searching for Meyers.

When Renovo Police were searching for him, they said he was considered armed and dangerous.

The department disseminated a photo of a vehicle they believed he might have been traveling in.

Renovo is about 65 miles north of State College and about 170 miles away from Loganville.

Online court records indicate Meyers was wanted on charges of simple assault and prohibited possession of a firearm.