A Scranton man is accused of indecently assaulting a teenage Jacobus girl he met over the internet two years ago, according to police. 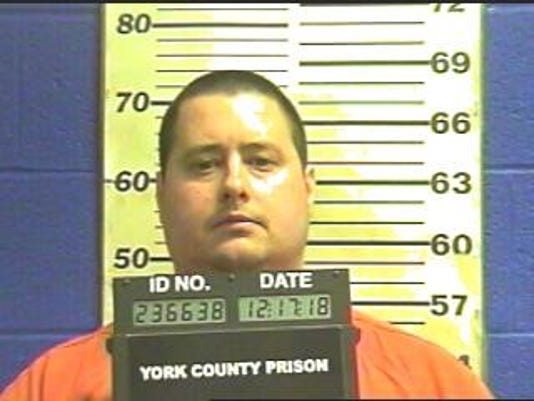 A Scranton man is accused of indecently assaulting a teenage Jacobus girl in her home two years ago after the two met online, according to police.

York Area Regional Police said Robert Alexander Kusma, 33, met the 15-year-old girl in her home in July 2016 and molested her while her parents were away.

Kusma, an ER technician at Commonwealth Regional Hospital in Scranton, showed up at the girl's home with whips, ropes and a dog collar, according to authorities.

He is charged with indecent assault of someone younger than 16, unlawful contact with a minor and sexual abuse of children, according to police.

Met girl online: Police said the victim told them that she met Kusma on a website called Omegle, and the two then started chatting on a different application.

Initially Kusma claimed to be 22, but later he told her he was 33, charging documents state.

The victim told Kusma that she was 15, officials said.

Police said Kusma sent graphic pictures to her, and he would talk to her about how he would punish, torture and sexually assault her.

"(Kusma) told her that he was her master and he was in charge of her and was training her," Detective Donald Hopple Jr. wrote in charging documents.

The victim told authorities that she and Kusma had exchanged nude photographs of each other, officials said.

Kusma convinced her to give him her address, and he told her he was going to see her, charging documents state. Police said he sent a picture of what he was bringing, which included ropes, handcuffs and whips.

Kusma let himself into the home and into the girl's room and began groping her, charging documents state. Police said he molested her on her bed.

The victim's friend came over and told Kusma to leave, court documents state.

Kusma left and walked toward his car but had to return to retrieve the whip, rope and dog collar he brought to her home, officials said. Police said he had put the dog collar on the girl's neck.

He left behind a pair of sunglasses, according to authorities.

Investigation: Police responded to the scene and collected the sunglasses for testing, charging documents state.

Police said officials searched the victim's phone, where they found a photo of Kusma.

His photo was sent to multiple agencies for circulation, and it was run in Pennsylvania and Maryland facial recognition programs, but a match was not found, court documents state.

On Dec. 10, the photo was run through the system again and matched with Kusma, officials said. In Kusma's previous license photo he was not looking directly at the camera, which is why a picture did not match earlier, according to police.

Kusma got a new license in September, charging documents state.

Additionally, police found that Kusma was an ER technician, which matched with the suspect telling the victim that he worked in the medical field, officials said.

On Dec. 17, authorities in Scranton searched his home and found evidence that was described by the victim, officials said.

Kusma spoke to police as well, and he admitted to committing the offenses at the home in Jacobus, court documents state.